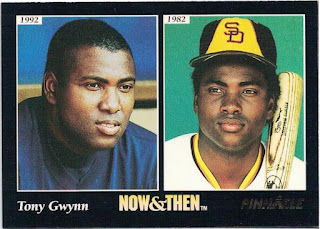 This card marked Tony's tenth season in the Major Leagues. The photo from 1982 looks very familiar, but it obviously wouldn;t have appeared on a Pinnacle card. I think it might have been reused in a more recent release by a card company. I am absolutely certain the green background is a photoshop (or equivlent) job. The software debuted in 1990 and was adopted by the designers at card companies not long afterwards.
The back is relatively plain, just summing up Tony's career to date. 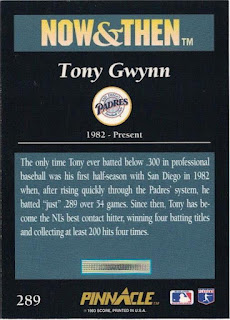 Did you notice the big trademark (TM) sign next to Now & Then? Having taken a project through the process to register tradmarks, I doubt that wording was ever a defendable trademark. Pinnacle's legal team could have tested it though, that very same year! Except Upper Deck switched the words around.

There were 18 cards in this insert series, which might have been the first time Upper Deck used holograms on their cards. 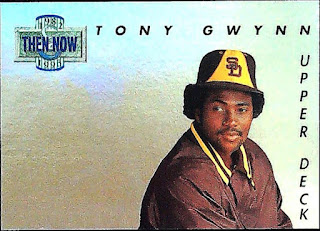 Trying to get a hologram to show on a scan is annoying. However, jiggle the card a bit and Tony appears! 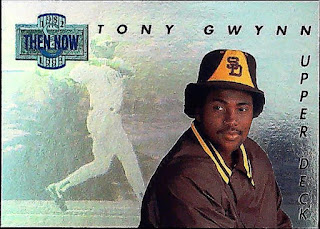 Upper Deck were going through a phase of creating long blurbs to go on the backs of insert cards. There is another picture of Tony inserted as a watermark under the text. The write up includes how he just pipped Will Clark to a batting title - something I discussed when I blogged a card featuring both of them recently. 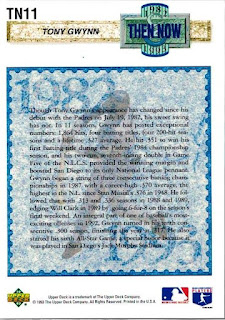 Upper Deck didn't try to trademark the phrase 'Then & Now', even though they made much more of an effort with the logo for the insert series!
Total: 811 cards

Posted by Jongudmund at 8:56 PM