One Card Only - Topps Tek

I occasionally mention the glut of parallels in the hobby currently. Okay, I mention it more than occasionally. But it's not a new phenomonon. Today's card is from perhaps the most overblown set ever produced in terms of the sheer number of parallels.

It's well over the top. It's Topps Tek.

There were 90 base cards in this card set which was printed on acetate, and each card was printed with 90 different 'patterns' on the acetate. That's 8,100 different cards, if anyone was committed enough to try and collect them all. But then there were also 'diffractor' versions of each pattern of each card as well - another 90 parallels of the 90s cards, and another 8,100 cards in the set!

That set bloat might explain why there are only 1.1% of the images on Trading Card Database. This card wasn't pictured on there, so I have submitted it. 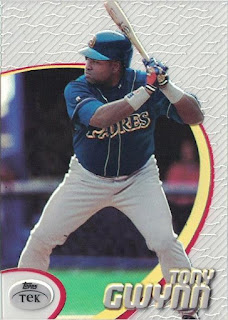 Compared to some of the other designs, this is a lot less snazzy. It's a ripple effect.
Because it's acetate, they've flipped the image of Tony on the back to match the shape of his head and bat. We have yet another serious photo - hey, it's a card from 1998. That's what they did. 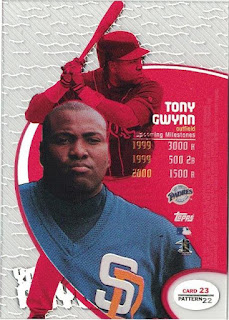 The cardback threw me a bit because it had milestones for Tony in 1999 and 2000. But this is definitely a card from 1998 - I have triple-checked! (Thank you, YoRicha, for uploading some pictures on to TCDb!) So I think those were Topps trying to predict when Tony would achieve the milestones.

Getting a Topps Tek card for the collection had been one of my aims for a while. Collecting all 90 is very unlikely.

Posted by Jongudmund at 8:34 AM