Apologies if the thread title has given you a musical earworm.

Occasionally I ask the question, when is a baseball card not a baseball card? How about when it's the back of a sticker? Topps Stickers were released in the late 80s. The stickers could be stuck into an album, but the sticker backs were little trading cards in their own right.

To make things even more fun each sticker came with different possible cardbacks, so if you were collecting both, you could end up with needing just the sticker or just the cardback, making swapping stickers more difficult because you would ideally be checking the front and the back of the ones you were swapping to see if you needed them both. 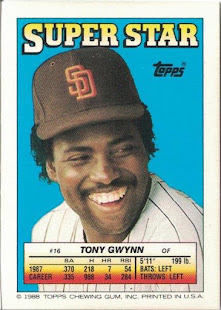 The sticker this card backs on to is #159, a foil sticker of Wade Boggs. 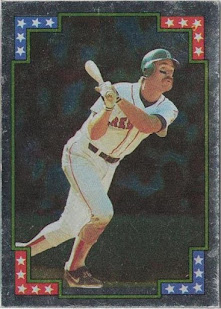 This sticker also appeared with three other cardbacks, of Andre Dawson, Tim Raines and Mark McGwire. Tony's sticker in the set was #115 and is available with Superstar cardbacks of Gary Carter and Mark Langston.

Tony's waiting for his turn in the batting cage in this photo. (Is my guess!) 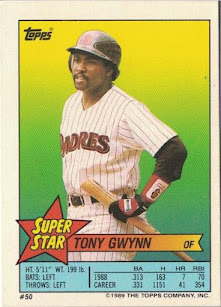 Both this card and the previous one list Tony's weight at 199 lbs. Usually trading cards round to the nearest 5 lbs.

The stickers on the reverse are #29 - Rick Mahler from the Atlanta Braves, and #269 - Floyd Bannister of the Kansas City Royals. 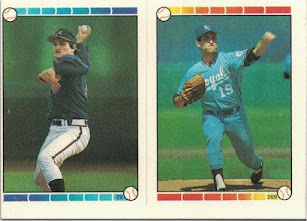 Rick and Floyd's alternative cardbacks were Kirby Puckett, Dave Stewart and Barry Larkin. Tony's sticker in 1989 was #109 and his Superstar cardbacks were Paul Molitor, Dave Henderson and Mike LaValliere. 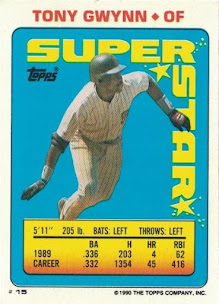 The stickers on the other side are #138 - Todd Benzinger of the Cincinatti Reds, and #292 - Dan Gladden of the Minnesota Twins. 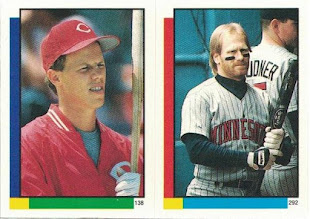 Unlike in other years, this sticker of Todd and Dan only appeared with Tony's cardback. Tony's sticker was #101 and was produced with two different cardbacks - Mike Sciosa and Rick Reuschel.

The Superstar cardbacks are all smaller than a standard trading card and slightly smaller than "Topps mini" cards that were for sale around the same time. Collecting all the different sticker and cardback combinations that Tony is in would be a real challenge. I'm going to file that idea away for now!

Posted by Jongudmund at 9:27 AM