Back to Base - Fleer Ultra at the end of the 90s 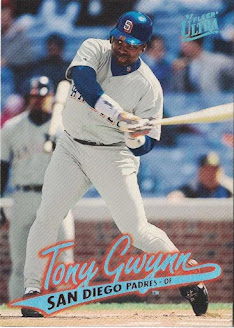 The swoosh of the name is quite attractive.
The cardbacks have shifted from minimalist stats boxes to a full career box. 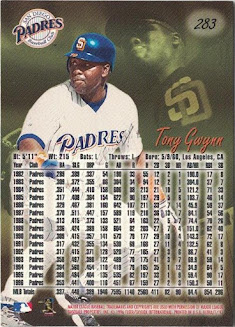 The ghostly sepia version of Tony on the back is a look that I mentally class as 'Jedi Spirit Tony'. In the colour photo Tony looks spooked. Maybe Jedi Spirit Tony was only visible when the photo was developed! (Yes, I know I'm being silly!)
Card Number 307: Fleer Ultra, 1998; #108
Superficially, this card design looks a lot like the card from 1997, particularly the lettering on the player name. 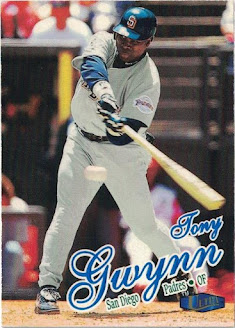 On the back the stats box is so huge Tony is having to peek over the top. It's almost as if he's standing on tiptoes to see. 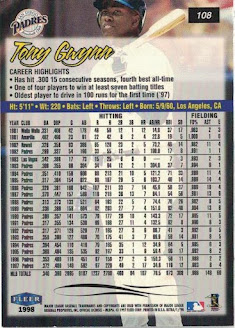 This cardback has a new feature - factoids. The third one is new data to me - when Tony scored over 100 RBI in 1997, aged 37, he became the oldest player to achieve that for the first time in his career. That's testament to how he kept on doing new things, and also just how good he was for a couple of years in the mid-90s. In his career Tony rarely came close to hitting 100 RBI - his next best total was 90 in 1995 and he had a few seasons where he posted over 70 RBI.
Card Number 308: Fleer Ultra, 1999; #59
After a couple of years with photos of Tony at the plate, in 1999, they showed him at the wall. That's a serious leap! 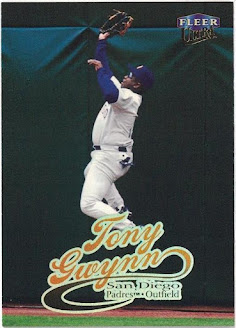 The design of the players name was even more elaborate this year.
The back saw another return to orange. It's a cheerful colour. 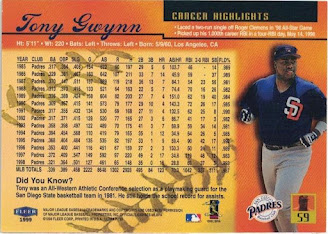 The career highlights are cool little factoids again. They chronicle Tony's hit off Roger Clemens in the 1998 All Star Game in Denver, and Tony recording his 1,000th career RBI the previous season as well. He managed his only RBI century season in 1997, as we know from his 1997 Fleer Ultra cardback, and so it's no surprise it had taken him a long time to amass 1,000.
(As an aside, I've heard people say "Ribby"when talking about RBI. I always pronounce the letters - ArBeeEye - which is correct?)
Unlike the career highlights, the 'Did You Know?' factoid goes all the way back to Tony's college days and his achievements on the basketball court. That information crops up several times on cardbacks, so it was probably much more likely that people would know it compared to the bullet point about RBI.
That closes out the Fleer Ultra decade. I'm missing one card, right from the middle, and have added it to my wants list. I'm sure it will appear on this blog at some point in the future.
Total: 308/394
Posted by Jongudmund at 9:30 AM