Score Select was a premium range released by the Pinnacle group in the mid-90s. The Select card from 1993 has already featured on this blog because it featured Tony in mid-slide. 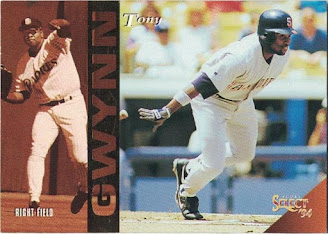 Select was a bit special, as you can see by the classy calligraphy of the logo. Bonus point for having the set year on the front - something they tended to do every year. The juxtaposition of a colour photo and a sepia photo on the front, and 'Tony' in a serif font with 'GWYNN' set perpendicular in blocky capitals are very mid-90s design choices. 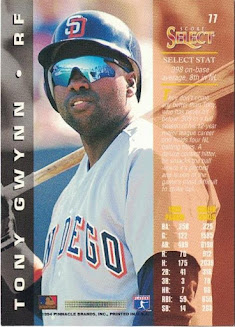 The cardback has an entry in the 'unique descriptions on cardbacks' list: "A deluxe contact hitter". It's just a shame the font is so small and unreadable. But those shades look cool.

Select cards also included a Select Stat - on this card the Select Stat is that Tony had an on-base average of .398.

Pinnacle dropped the word Score from the Select logo in 1995. However, I'm not changing my labelling now. 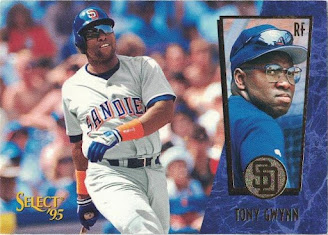 Tony seems to be wearing prescription specs in that little cameo portrait. 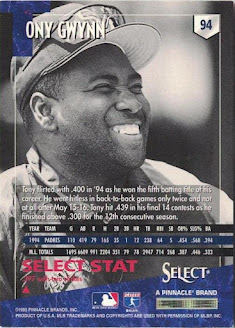 Because of the lettering choice, his name looks like 'Ony Gwynn' on the back. The Select Stat was that he batted .397 when he was down two strikes. Tony rarely struck out and he often went after the first decent pitch he saw.

Two batting photos on the front of the card. 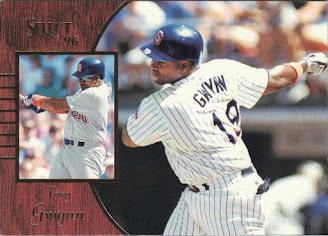 The cardback places a red box around Tony's face. File that under 'odd decisions that card lay-out guys make'. 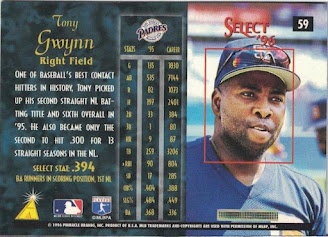 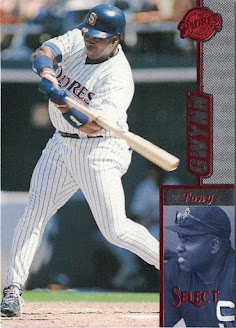 In 1997 the Select range returned to the colour and monochrome pictures on the front. 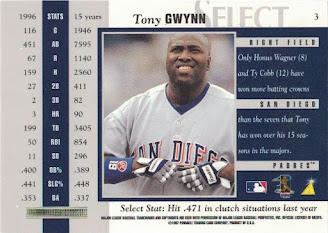 The cardback photo needs a caption like "The gloves are coming off!" Instead there's a Select Stat that Tony hit .471 in the clutch in 1996.

And for good measure, here's a bonus card from a Select sub-brand. 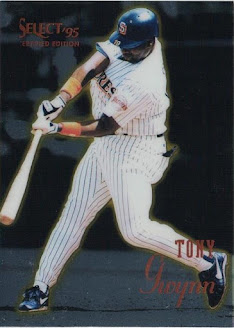 Certified Edition was a spin-off 135-card high premium set that was sold in hobby boxes. The cards are all foilboard. They look nice in real life but are tough to scan.
The cardback separates out Tony's performance against different opponents in the 1994 season. 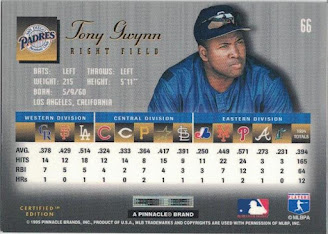 As statistical breakdowns go, this is really well done. It's also very handy that this is for the notable season when Tony hit .394. During the season he absolutely nailed the Phillies and the Dodgers, hitting them over twice as much on average as the Marlins or the Expos, who he struggled against.Just think what his batting average might have been if he had skipped the trip to Florida.

Looking at the 1994 schedule, the Padres played the Expos, who Tony struggled to hit against, in Montreal, and then went straight to Philadelphia to play the Phillies, who Tony blasted at a rate over .500. He must have really preferred batting in Philly!

Posted by Jongudmund at 8:39 AM