This is a card freshly pulled from a Topps 2021 Series 2 pack, and sent to me by Gawain. He has sent me a brand new card two weeks running now! 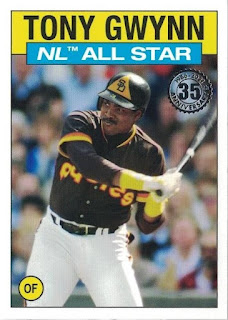 This is a really nice looking card, using the template of the All Star cards in the set that Topps released in 1986. There are a few things that trip the Anachronism Klaxon, though!
The obvious thing that sets off the klaxon is that Tony didn't have an All Star card in the 1986 set. He had one at bat in the 1985 game but wasn't deemed worthy of a card.
That uniform is wrong for a card in 1986 as well. The Padres ditched the classic brown, yellow and orange after the 1984 World Series and went to white pinstripes.
And then there's the back... 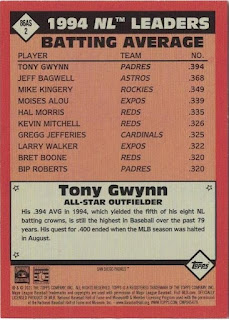 Topps have put Tony's stats from 1994 on the back of this card that replicates the 1986 card design. It's odd, even by Topps's standards for doing odd things. Yes, that was an amazing year in terms of Tony's achievements - this blog is called "point 394" because of that season - but why highlight that season on this card? Who knows? Like the Almighty, Topps moves in mysterious ways far beyond the understanding of mere collectors.

However, this is a really nice looking card and I can tune out the klaxon. It is also particularly noteworthy because it is the 19th card from 2021 to make it into my collection. 19 is a very special number around here. Thank you Gawain for sending me this card!

Posted by Jongudmund at 7:16 AM