I have read there was some concern about the way the baseball card hobby was going in the early to mid-90s. Cards were becoming more expensive and with inserts, parallels, relics and autographs, kids - the collectors of the future - were being priced out of the hobby. In an attempt to rectify this the major card companies launched sets designed for younger collectors. These never really took off that well, but they have left collectors with some quirky cards to hunt down.
Card Number 740: DonRuss Triple Play, 1994; #187
Tony looks almost like he is yelling or laughing in the photo. This card gets a bonus point for including the year in the set logo. I also like the effect of the see through 'cut out' letters.
It's a fairly boring cardback for a range aimed at kids, particularly compared to the Triple Play cards from 1992 and 1993. DonRuss had obviously decided that what kids really wanted was a massive stats box. 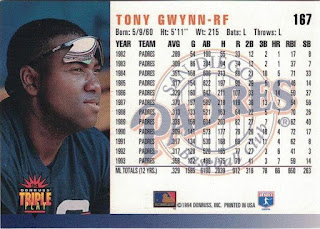 Card Number 741: Upper Deck Fun Pack, 1994; #119
Not to be outdone by their competitors, Upper Deck also had their own range aimed at kids, selling packs of fun cards called Fun Pack!
I would love to know what Tony has seen in that photo. A ghost in the outfield, perhaps? Maybe he's just feeling a bit dizzy, which is why he is surrounded by swirls.
Fun Pack cards lived up to their name with the cardback. Instead of a photo there's a little charicature of Tony. At this point he only had four batting titles, although he had come mighty close to five the previous season. He would collect his fifth title the year this set was released. 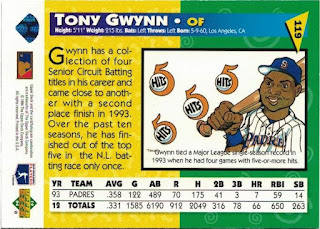 Both card companies discontinued these sets after 1994. One theory I have seen is that kids felt these sets were condescending, and preferred to chase after the valuable insert cards in the regular sets. But these sets were also released just before the 90s baseball card bubble popped and the hobby went through a very difficult period of readjustment. Now they are relics of an era of desperate market differentiation when card companies tried as many different angles as possible to sell pictures of baseball stars to as many potential customers as possible.
Total: 741 cards
Posted by Jongudmund at 8:01 AM