Eat cake by the ocean

Well, that's what the Padres hoped to be doing this year. It feels less and less likely to happen.

But talking of the ocean, here's a couple of Pacific cards from the last year the Padres got to the World Series. 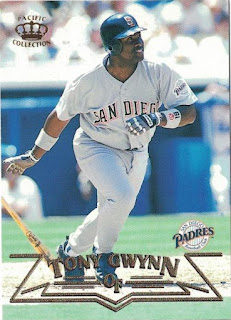 Somehow this card design manages to look both fancy and still very clean. The logo and player name are in gold foil.
Pacific's USP was targeting Spanish-speaking collectors. They also included the English translation on the back. That didn't leave much room for any stats. Somehow they managed to fit everything in, including Tony posing with one of his bats. 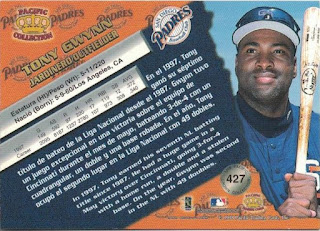 The orange background locates this firmly in the late 1990s. As ever, Pacific get a bonus point for putting the detail of the set name in the little circle with the card number. It's a great help to collectors like me over two decades later!
Card Number 733: Pacific Aurora, 1998; #191
Such a green card! 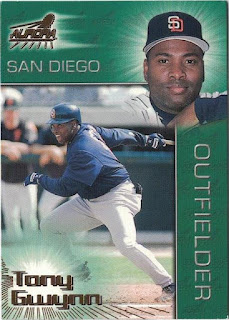 The 1990s was the decade when PhotoShop became a thing and this card design is almost Photoshopped to death. I appreciate the halo around Tony's head in the top right image.
Also, you may have noticed this just says San Diego on the front. It repeats that on the back. The Aurora range was only licensed by the Player's Association so they didn't include franchise names. I presume Pacific had a license from MLB to print a limited number of sets, or perhaps there was a stipulation in their contract that they could only produce Spanish language sets - and this is just in English. 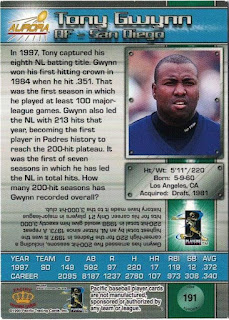 There is a trivia question on the back about how many seasons Tony recorded more than 200 hits. To save readers from craning their necks, here's the answer.

Tony didn't record a 200-hit season after 1997 so that answer (5) is still the correct answer.
The photo on the back is quite similar to the one on the back of the Topps Stars card I blogged about yesterday. Serious cardback photos must have been the fashion in 1998!
Total: 733 cards

Posted by Jongudmund at 9:26 AM