In 2007 Tony Gwynn was elected to the National Baseball Hall of Fame in Cooperstown, New York, in the first year he was eligible for the ballot. However, two card companies made an early case for his election, fourteen years previously. 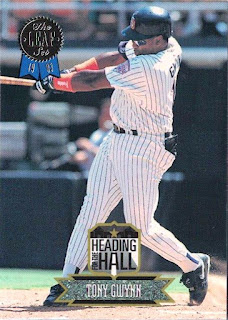 I really like the logo for this insert series with the little road heading towards a line drawing of the Hall of Fame. There are some sparkles under his name as well.
The back is outstanding. Leaf had fantastic cardbacks in their 1993 set and this insert series is no different. The combination of the picture of the National Baseball Museum that houses the Hall of Fame, a map of the area and a mocked up plaque shows some exceptional care from the designers. 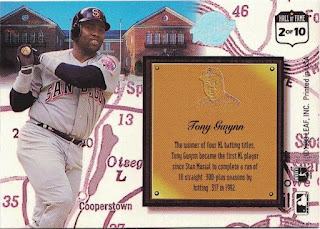 Here's what the actual plaque looks like, of course! 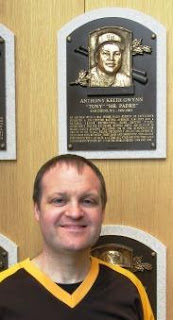 On that map you can see Lake Otsuga. Nobody ever really mentions Lake Otsuga when they talk about Cooperstown. This is a photo of it that is also my desktop background so I see it every time I write blog posts! 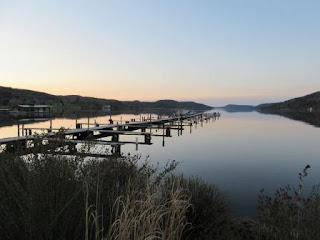 My wife Cathy and I spent two nights in Cooperstown on our road trip in 2016. I would happily say that the day in Museum and Hall of Fame was one of the best days of my life so far. It probably makes the top 3!
There was an exhibit in the museum about the player's strike in 1994 that cut the season short. That was the season when Tony was tantalisingly close to breaking .400. (Which is why this blog is called .394!)  That exhibit has one of Tony's shirts from the 1994 season in it. 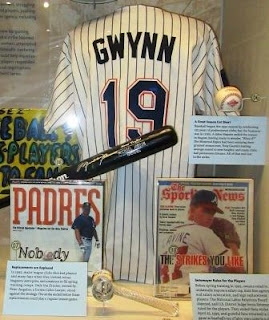 I also met another very famous celebrity from San Diego! 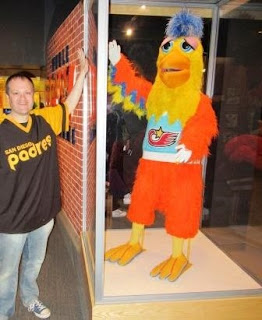 Anyway,. that's enough about the wonderful experience of going to the National Museum and Hall of Fame. Let's get back to baseball cards. Pinnacle were also considering future contenders for Cooperstown back in 1993...
Card Number 735: Pinnacle Cooperstown Card insert, 1993; #20 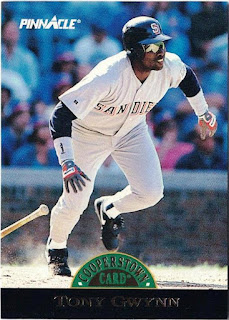 One day I am going to count up how many cards I have of Tony in this pose, preparing to sprint to first base, with his discarded bat disappearing off the edge of the card.
There's no map on the back, just another photo in his familiar anticipatory batting stance. 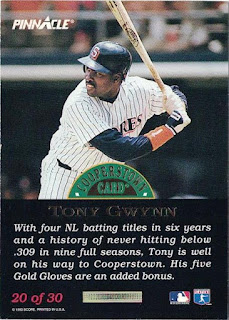 Pinnacle felt Tony was "well on his way to Cooperstown". He added another four batting titles before he finally got there.
It feels like both these card companies recognised Tony's greatness well before he retired and was officially inducted into the Hall of Fame. That is a genuine indication of his ability and attitude at the height of his career.
Total: 735 cards
Posted by Jongudmund at 8:35 AM