A trio of Topps parallels

Today I'm going to be blogging cards that have been on this blog before in a different guise. These three parallels came in the recent parcel from France. 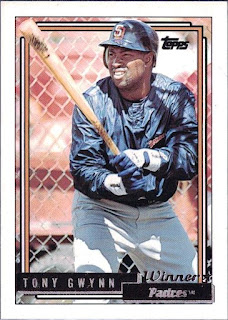 Tony's name and the word 'Winner' are in embossed gold foil on the front, which differentiates this from the normal Topps Gold card.
The 'Winner cards' were sent out in return for "runs" collected on 'Match the Stats' game cards inserted in packs. Unfortunately it was apparently easy to cheat and use a torch to reveal the answers on the game cards, so Topps were inundated with redemptions. Topps printed 'Winner' on the cards they sent out because they wanted to preserve the rarity value of the Topps Gold cards that were randomly inserted in packs. According to Baseballcardpedia, these 'Winner' cards are a lot more common than the pack-pulled cards.
There's a nice variation on the cardback with the Topps Gold logo watermarked behind the stats box. This was the last year Topps did a plain stats box on the back. 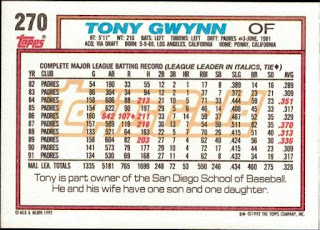 Tony's son mentioned on the back, was, of course, Tony Gwynn Jr, who went on to have a Major League Baseball career himself.
Card Number 717: Topps Gold, 1994; #620 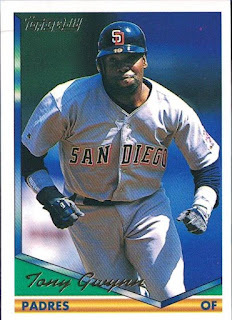 There is a little Topps Gold logo top left and Tony's name is printed in gold foil. These cards were parallels inserted into lucky packets.
There is no difference in the cardback from the regular base card. The factoid is about Tony joining various baseball legends in achieving four five-hit games in a season. He is the only one of those players to have played in anything approaching the modern era. 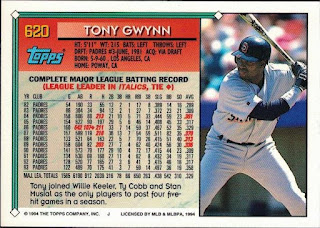 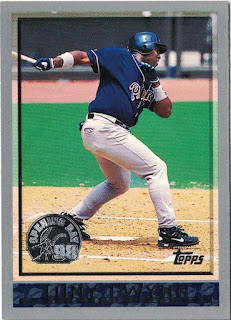 Tony was #1 in the flagship set, so it's not a surprise that he was also #1 in the Opening Day set as well. It's still cool that he was on the first card in the set, though. There's also a silver foil stamp celebrating Opening Day.
The back is exactly the same as the base card, even down to it's hard-to-locate set number! 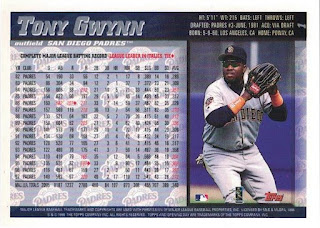 I feel there is enough variation in all three cards to keep these parallels interesting. I now need to add them into my Topps binder, which may result in me moving a few cards around accomodate them. But that's a nice problem to have!
Total: 718 cards
Posted by Jongudmund at 7:33 AM