Freshly unpacked from the parcel from France, here is a trio of oddball cards from the 1990s, which were given out at ballgames or inserted into Mother's Cookies bakery products.

Mother's Cookies was a company founded in Oakland in 1914 where it had it's main bakery until it went bankrupt in 2008. The brand was subsequently bought by Kellogg's and is now owned by Ferrero. They released their first baseball cards in the 1950s for a few years, then resumed printing cards during the 'overproduction era', which is the polite term for the 80s and 90s.

Being a California-based company and mainly supplying stores on the west coast of the USA, Mother's Cookies focused on teams that side of the country with commercial tie-ins to produce franchise-specific, and even player-specific, sets and co-ordinating in-stadium giveaways. They produced team sets of Padres players in 1984 and 1985 and from 1992 to 1998.

Obviously, I knew these cards existed. I've seen them on other blogs and I had them on my 'maybe one day' list. So when they appeared on the checklist of cards that Greg had for sale, I was delighted. 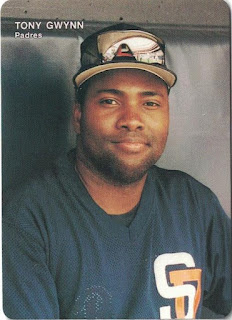 The cards have rounded edges with full bleed photos. This is a lovely portrait of Tony looking relaxed.
The back is quite plain, with space for an autograph. As these were often ballpark giveaways, there was a chance, maybe, of getting a player to sign the back of his card. 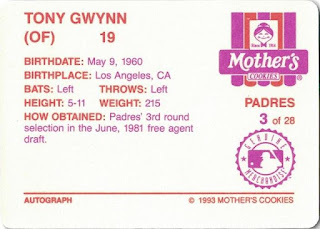 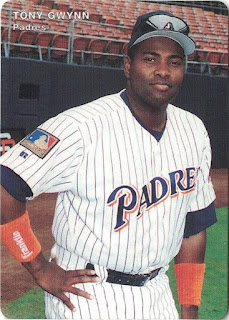 Another full-bleed photo portrait. This time it's slightly more posed and less natural.

Whoever was working on these for Mother's Cookies didn't go to a lot of effort with the cardback. It is virtually identical to the previous year's apart from the card number and the copyright notice. 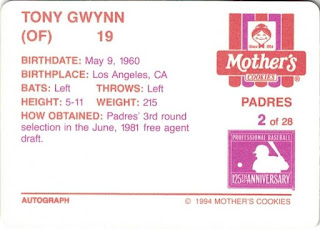 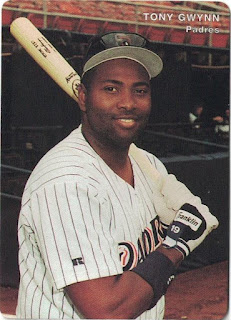 We round out this trio with another really nice posed photo. Tony's number is visible on his batting glove and I think that is one of his signature bats he is posing with. There are other people lurking in the background of this card, which makes it a bit different to the other two.

The back doesn't deviate from the established template. 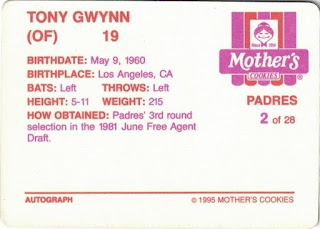 Oddball cards are sometimes a lot more odd than these. The quality of photos used on these cards elevates them above most other commercial tie-ins. Although the backs are a bit plain and repetitive, that doesn't really matter. Only the most committed fans are going to bother looking at the backs!

Posted by Jongudmund at 8:01 AM