Leader of the Team

This was another one of the half dozen cards from Jeff that arrived on Tuesday. It's green. It's got a bit of foil on it. It's really nice. (I find green cards really attractive for some reason.) 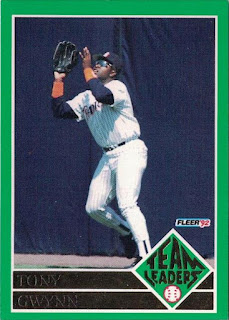 These cards were inserted into Fleer's rack packs at a rate of one per pack. Tony is making a catch on the warning track. Somebody's not getting a home run!
On the back, Tony is described as "Primre Padre" - I've not seen Spanish on a Fleer card before! (Although it's a bit weird because it means 'First Father' if translated literally. Maybe they would have been better with "Jefe de Equipo".)
In the write up, he is described as a "franchise player", which Fleer claim is a term that is "used in baseball lingo". (It feels like they should have added "Honest it is! No, really!") 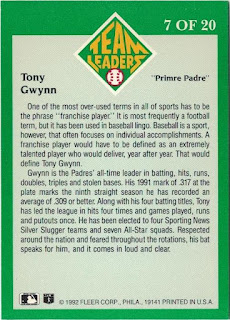 Reading cardbacks like this from halfway through Tony's career are always slightly overshadowed by knowing what came next. He was already an all-time Padres leader in a number of statistics, but there was so much more to come. Another four batting titles. A string of seasons posting over .350. Eight more All Star Games. The .394 season.
Also in this write up there is a really lovely turn of phrase when whoever wrote this managed to go poetic, rhyming 'nation' and 'rotation'.
For this post, I've paired this card up with one that arrived in the parcel from France a few weeks back.
Card Number 744: Fleer Team Leaders, 1994; #27 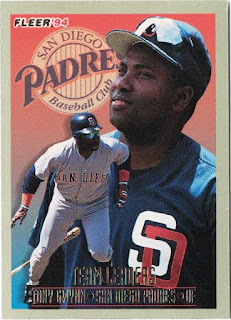 These inserts could be found at a ratio of one in every six packs. The front is a good example of how computer aided design changed the look of baseball cards in the early to mid-90s, with two photos and the logo arranged artfully on an orange and teal background. So nineties!
On the back, Tony's hitting is described as pillaging. 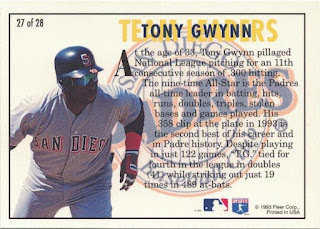 My inner number-nerd let out a slight "Squee!" when I saw Tony's strike-out total for the 1993 season. How many players strike out to match their shirt number!

Posted by Jongudmund at 8:16 AM