Topps base completion, thanks to Richard

For a long time I have been aware of significant gaps in my collection. One of them was filled at the start of the month when Tony's Topps base card from 1996 arrived in the quantity of cards from Greg in France. And just a few weeks later, Richard's parcel contained the other missing piece - Tony's card from 2001. 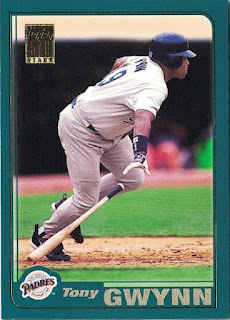 This isn't the first time this card design has appeared on this blog. I have previously posted about the Opening Day and Chrome versions. But this is the first time I have posted this basic version.
It ticks all the usual boxes for a Topps base card, though. Tony is looking away from the camera. His name and number are barely legible. If it wasn't for the logo printed next to his name, this could be an unlicensed card.
On the back, Tony is sitting in a training top and the Padres logo on his hat is hidden behind his sunglasses. Again, this could be a logoless card. Tony is also sporting his salt-and-pepper stubble that he often has in photos taken around the turn of the millennium. 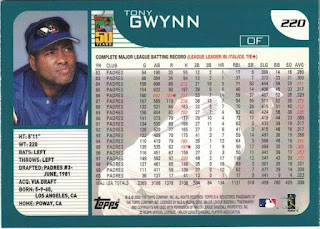 Considering this was Topps 50th anniversary year, the cardback was quite dull. The red numbers in the stats box denoting times he led the league is effective though.
So now, thanks to Richard, I can happily proclaim this mission is complete. If I so desired I could create a 'carpet of cards' that looks like this... 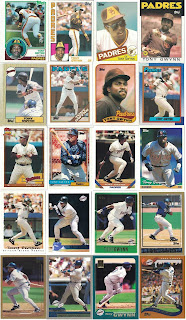 Looking at that, I reckon about 10 - half of them! - don't show Tony's face clearly. However, I like the way Topps alternate the direction Tony is facing on their cards from 1995 onwards, with the exception of 1997 and 1998 when he facing to the right side of the card.
Completing the run of Tony's base cards has been a little 'side mission' for me, and I'm really glad to have finally ticked it off!
Total: 751 cards
Posted by Jongudmund at 7:45 AM

Email ThisBlogThis!Share to TwitterShare to FacebookShare to Pinterest
Labels: 2001, base card, Topps