These are some cards that are very similar to cards that have been on the blog before. They are parallels from Upper Deck in the early 90s. The cards are interesting, although the 'parallel' bits aren't particularly.

The regular version of this card was the 87th card I blogged about, back when I did 'Monday Mixers' of unrelated cards. 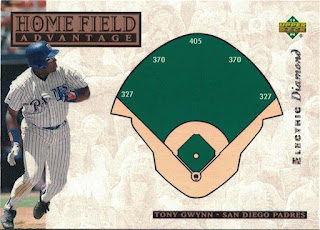 This card wasn't an insert. It was in the Upper Deck base set, with every team receiving a card numbered between #267 and #294. Tony Gwynn's minor league room-mate and lifelong friend, John Kruk, features on the card for the Philadelphia Phillies (#276).
The parallel bit is the silver foil 'Electric Diamond' written up the side of the card. There was one of these parallels in every pack. I already have the Electric Diamond parallel for Tony's regular card in the set.
The back is more interesting than the front. I am certain this is the only Tony Gwynn card to mention skunks on the back. 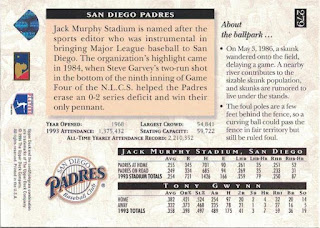 The regular version was the 263rd card on this blog. 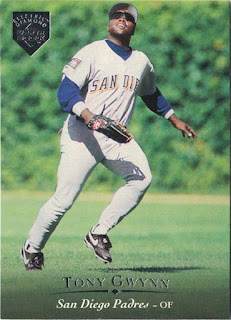 The Electric Diamond logo replaces the bronze Upper deck logo on the regular card. This is the silver foil version, which was included at the rate of one per pack again. A gold foil version was released too, but it was much rarer - collectors would only find a gold one in every 35 packs.

This base card photo is from the same game as the image used on cards released by Leaf and Fleer in 1995 - see them all here. I wonder if the card companies ever compared notes and realised they had basically all bought the same photo. Not a bad day's work for the snapper.

The back is just a classic Upper Deck cardback. They liked to give their photos space and truncated the stats box. 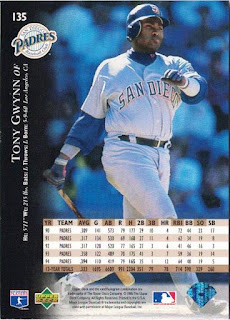 These parallels have given me the task of reorganising my Upper Deck binder, which I have to admit has been badly arranged from the get go. I want to make space to put the parallel cards next to the regular versions of the cards. That's a fun job I think I will leave for a wet weather day!
Total: 728 cards
Posted by Jongudmund at 7:39 AM