Two days ago an envelope arrived all the way from North Dakota containing six Tony Gwynn cards that I didn't have before. They were sent by Jeff who blogs at Wax Pack Wonders, along with a note.

Jeff says 'Believe it or not' - well, I believe! And I'm really grateful to be able to give these wanderers a home!

One of the cards was from my favourite ever Leaf set, and in a change to normal practice I'm going to show you the back of the card first. 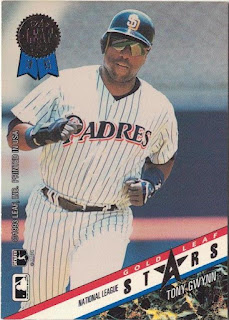 You can tell this is the cardback because it has the copyright notice up the side. On Saturday I blogged about another card from the Leaf 1993 set which had a brilliant cardback featuring a map of upstate New York. The base cards from the 1993 set also had spectacular backs with cityscapes in the background. Tony's brother, Chris, got a card in the Update series of that set too.
This could have been a "Sharing the Spotlight" post, which is what I do when Tony features on a card with another player. These All Star cards had a National League All Star on one side and an American League All Star on the other. Tony was paired up with none other than Jose Canseco. 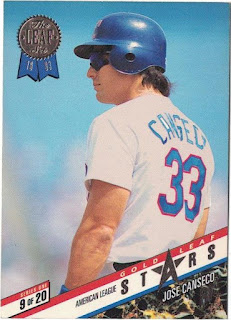 The vivid blue background in the photo of Jose really makes that picture look a bit special - more so than the picture of Tony. With the floaty fuzzy clouds and the sunlight striking him, he looks like a demigod. Not a bad cardfront, even if the real interest, for me, is on the cardback!
Thank you Jeff, for this great addition to my collection, and for the other cards too, which I will be blogging soon!
Total: 742 cards
Posted by Jongudmund at 7:27 AM