Sharing the Spotlight with Eddie Murray

This card was a challenge, but thanks to Google Image Search I was able to track down who was presenting Tony with a glass plaque, and why... 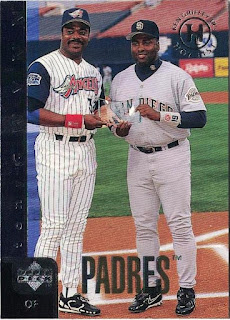 Upper Deck went through a phase of using quirky photos on cards (Tony's base card in 1997 showed him with a fish!), but annoyingly there was nothing on the back of this card to explain what this presentation was about.
The Internet came to the rescue! I uploaded my scan to Google Image Search and found this picture is one that Getty Images has for sale. The complete blurb on the Getty website says:

This image is for sale, so if I wanted to create my own card using this same picture, it would cost me $375. I'm not going to do that but it's nice to know I could if I wanted.
"Steady Eddie", as Murray was known, spent 11 seasons at the Orioles before moving around several teams. 1997 was his final Major League season at the age of 41. He played most of the season for the Angels although he also played a handful of games with the Dodgers. He was elected to the Hall of Fame in 2003.
Althought the cardback doesn't mention Eddie, it does have a superb cardback factoid about Tony hitting an inside-the-park Grand Slam in June 1997. 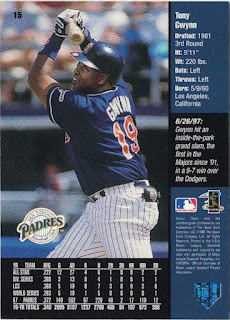 The stats box is also a bit different, comparing Tony's stats in All Star Games, World Series, and so on.
Tony had multiple cards in the Upper Deck set in 1998. Here's a bonus one, which was in the envelope from Jeff that arrived earlier this week.
Card Number 746: Upper Deck, 1998; #458
Upper Echelon was a ten card subset in Series 2 of the Upper Deck flagship set. This has a factoid on the front - I'm presuming the 24 September was Tony's 67th and final multi-hit game of the 1997 season. But maybe it wasn't. The factoid is unclear. 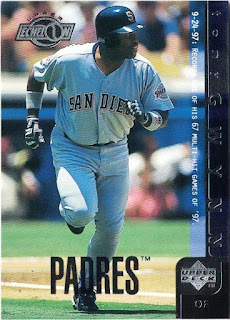 The back has a different photo to card #15 - this time it captures the retro Swinging Friar arm patch really nicely. There is also a visible blur on the bat as it's swung. 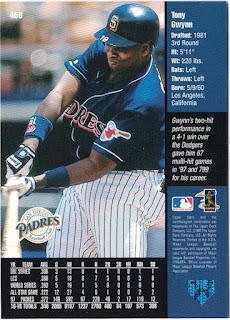 The factoid on the back of this card is also different to #15. Like the factoid on the front, it is also about Tony's haul of multi-hit games.
Tony played 145 games in 1997, so his 67 multi-hit games means he had more than one hit in almost half the games he played. He actually recorded 220 hits that season on his way to a .372 batting average, his second highest total in his career.
Total: 746 cards