One Card Only - PG rating

I might need to explain the post title for any readers based outside the UK. Basically, 'PG' means 'Parental Guidance' and it's used for films that might have a few scary scenes in, so parents should be aware of that before letting their kids watch the movie.

There's no parental guidance needed for this post though, as the PG in question is Proctor & Gamble, a huge multinational corporation that mainly produces chemical products from cleaning products to shampoo. In 1992 they also produced some promotional baseball cards in partnership with Score. 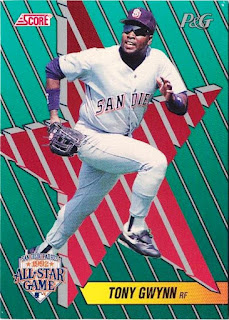 There were 18 cards in this set, featuring all the players in the starting line-ups for the 1992 All Star Game. Sets were received in return for proofs of purchase from Proctor & Gamble products (which included Pringles back in 1992 so if snacking was more of a priority than cleaning, then the mailaway was still achievable!). Score printed 2,000,000 sets (according to Baseballcardpedia) and I'm guessing most were claimed.
The back has a stats box and some information about Tony's contributions to the All-Star Game. There's also an endorsement from the then Cardinals manager, Joe Torre. 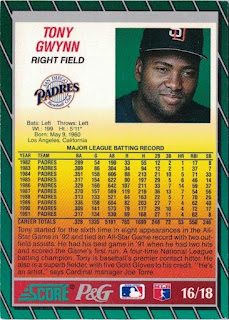 This card should probably be classed as an 'oddball' but it was produced by a fully licensed card manufacturer in the era when lots of companies could legitimately produce cards. It has the Proctor & Gamble logos on either side, so acts as a historical marker to a time when baseball cards were so popular just about every company wanted to use them to help shift their products.
The 1990s were an exciting time for Proctor & Gamble as the company became one of the first victims of a chain-email hoax. The email revived an old rumour that the corporation's profits went to the Church of Satan. This was compounded by claims that the company's main logo included Satanist imagery, which was part of the deal struck with Satan to ensure the company's success. Whoah, maybe there is a PG element to this post after all!
It turned out this hoax was started by a competitor trying to encourage a boycott of Proctor & Gamble products by earnest (and slightly gullible) Christians. This persistent rumour led to a multi-million dollar pay-out for Proctor & Gamble in 2007 against a competing company whose representatives had repeated the claims.

I remember reading an amusing book by someone who grew up in a fundamentalist Christian home where he wrote about his parents believing the rumour about Proctor & Gamble and throwing away all the products made by the company. It makes me wonder how many sets of baseball cards might have ended up in the trash by people worried about being contaminated by evil.

Fortunately this particular card has survived the purges caused by the hoax and now has a safe and loving home in my collection.