Parallels and special editions mean that card companies print virtually the same card twice and collectors like me will want both. It's such a common practice now that some collectors set out deliberately to collect parallel colour and foil versions, "collecting the rainbow".

This all started back in the 90s, and, yet again, Upper Deck were instigators of this development. Here are two cards from 1994 that I scanned together to illustrate what I mean. 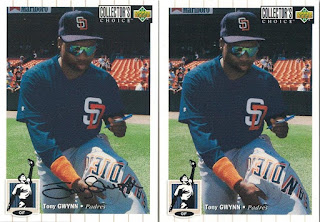 The silver foil signature comes out black on the scan. I do appreciate that Tony is actually signing a shirt in the picture, which really works with the silver signature in the parallel version. But this is basically the same card.

I clocked the Marlboro advert in the background which give this card that proper 'vintage' feel (it is over a quarter century old!). Back in 1994 you could still smoke in some ballparks, but the days were numbered for both smoking and the Marlboro ads. By 1998 most cigarette advertising was banned in sports stadia. 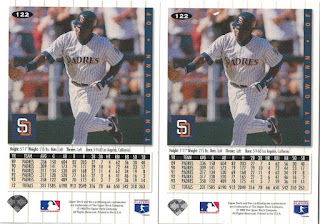 Every single Collector's Choice card came with a silver signature variant. However in 2000, Upper Deck decided to print the same card, but in a different set.

Here's Tony's card from the base set. 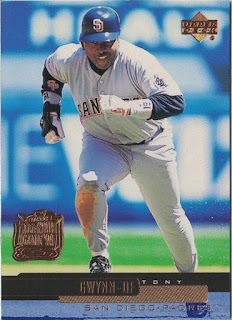 Upper Deck added the logo of the previous year's All Star Game to the cards of players who were selected. The 1999 game was in Boston. Tony was injured and couldn't play, but flew to Boston anyway to assist legendary hitter Ted Williams who was throwing the ceremonial first pitch. Ted was Tony's hitting idol and he considered it a huge honour to walk out onto the diamond alongside one of his heroes at the start of the game.

The back is a bold blue. 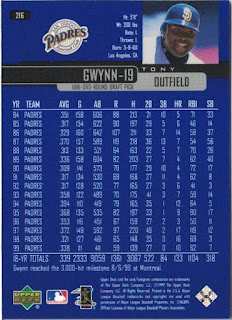 Upper Deck took 300 of their base cards, tweaked them a bit and released them as a different set. 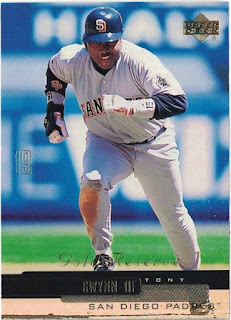 There's no blue strip on the front and they've taken off the All Star Game logo. The cardback has changed colour as well. 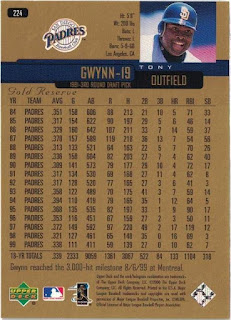 I assumed this was a parallel and it took me ages to identify it as belonging to a completely different set altogether. It's not the most elusive 'twin' I've ever had to find, but it wasn't easy!