It's not that long since I blogged about Topps confusing me by reusing their 1997 template in later years. Today's trio of cards were all released in the same year - 1999 - and are effectively the same card delivered in three different sets.

Before I start though, here's a bit of personal card collecting history. I recently found a spreadsheet of my Padres cards that I'd last updated in 2008. It was lurking in an old email folder. Looking at it was quite amusing because back then I only had 16 Tony Gwynn cards. Two of those cards are in today's post!

There was a time when Topps would differentiate their Opening Day set with different coloured borders and a foil stamp, unlike more recent times when they just photoshop an Opening Day logo onto the base card and say "That'll do." 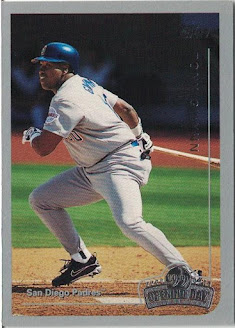 There isn't really much to be said about this card. As photos go, it's okay.
The stats box on the back is huge. The photo is a more unusual pose and therefore more interesting than the one on the front. 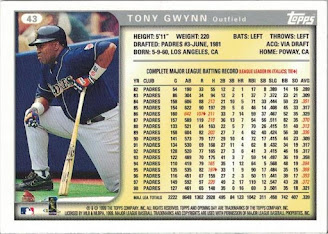 The base card has a gold border instead of silver. 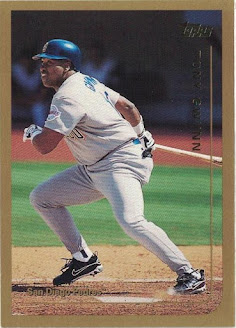 The back has a gold border too. The set number has changed as well. But everything else stayed the same. 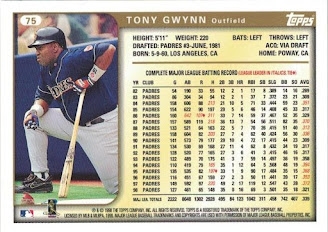 Topps Chrome is one of those card ranges that exist solely for the people who really love shiny cards. Like all shiny cards, they don't scan very well on my scanner. 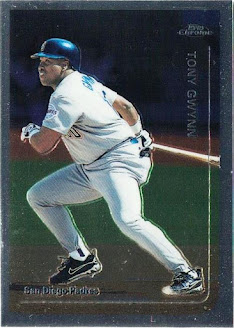 The chromatic effect makes Tony appear 3-D.
The cardback is the same as the base card, except the Topps logo has been changed to the Topps Chrome logo. 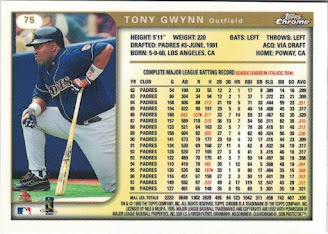 That's today's triple. I like having these cards together in a row in my Topps binder as they progress from silver to gold to shiny!

Posted by Jongudmund at 8:43 AM