Back to (Shiny) Base - Bowman's Best

Back in the 90s, Bowman was Topps's other, unassuming brand. But as sets proliferated and shiny cards became highly prized, Bowman's Best offered collectors with magpie tendencies another premium band to get their fix of shininess. (And if the base cards weren't shiny enough there were also parallel refractors to be had!)
Card Number 864: Bowman's Best, 1994; #78 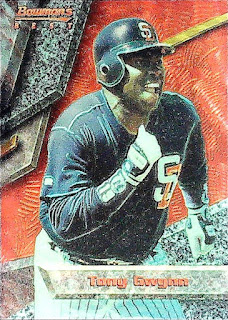 The red foil background on this card didn't scan very well, even using my overhead scanner. It's an aggressive looking photo of Tony. He looks cooler on the back. 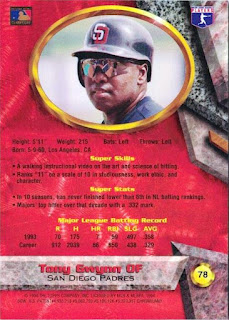 Bowman cards are often a source of interesting cardback factoids. In tiny font this descriubes Tony as "A walking instructional video in the art and science of hitting." (That sounds a bit dull really.) Tony's other super skill is apparently that he "Ranks 11 on a scale of 10 in studiousness, work ethic and character." That makes him sound like Spinal Tap's special amplifier.
If the "Special Skills" are a bit jokey, maybe the "Super Stats" will be better. The first one says that in the 10 preceding seasons he was never below 5th in the batting averages - that's a good stat. Then we have the arbitrary stat that in that 10-season selection his batting average was .332. That made him the top hitter in the Major Leagues, presumably among players who were also playing for those ten seasons.
Card Number 865: Bowman's Best, 1995; #21 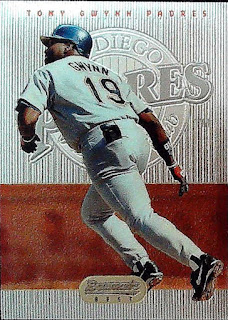 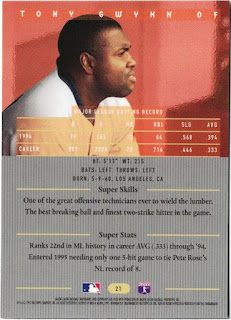 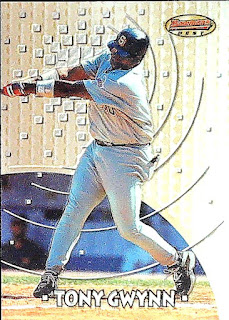 The swirls on this shiny card make it look like someone has added cartoon-style movement lines to Tony's swing. This is probably the most extreme example of bat-cropping in a card photo - practically the whole bat is out of the frame. There was an interesting cropping design choice for the photo on the back too. 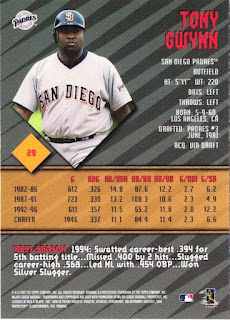 The stats box separates Tony's career into five year chunks that really illustrates how his batting average improved as his career progressed. The most crucial stat in Tony's career is hidden in the account of his best ever season - he was just 2 hits off scoring .400 in the truncated 1994 season.
Annoyingly, I am missing Tony's Bowman's Best card from 1998. However, I have two from 1999 to make up for it.
Card Number 867: Bowman's Best, 1999; #57 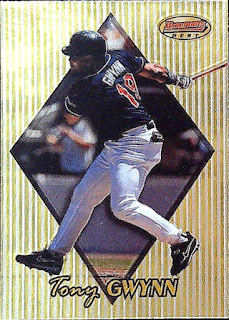 Super stripy golden shininess on the front. Lots of stripes on the back as well. 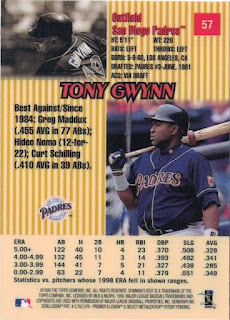 And look! In the second photo, there's a batting donut. Time to check out Fuji's list of Tony Gwynn cards featuring batting donuts aaaaaaaand..... this isn't on Fuji's list. There are two other Bowman cards there though. Whoever picked the photos for Bowman liked donuts.
The factoid is about Tony's performance against certain pitchers. His best record was against Greg Maddux, who has been quoted as saying

“Sometimes hitters can pick up differences in spin. They can identify pitches if there are different release points or if a curveball starts with an upward hump as it leaves the pitcher’s hand. But if a pitcher can change speeds, every hitter is helpless, limited by human vision. Except for that f---ing Tony Gwynn.”

By the end of his career, Tony had faced Maddux 107 times. Maddux didn't strike him out once.

Tony had two cards in the 1999 set, appearing in the "Best Performers" subset as well. 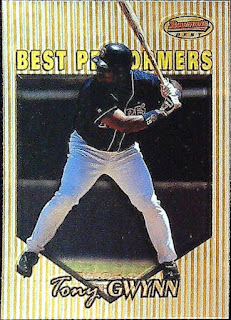 Stripy shininess again on the front. More stripes on the back and, wait, what's that? Another batting donut? 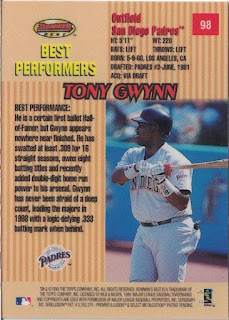 That's two pictures with donuts in the same set, with the pictures taken in different games judging by the uniforms. The picture lay-out guys at Bowman really loved their donuts!!

In the factoid, Bowman predicted Tony would be elected to the Hall of fame in his first year of eligibility. The prediction came true in 2007.

Posted by Jongudmund at 8:17 AM