Running through the 1988 Star set part 3

The final cards in the Star set to finish off this run-through. 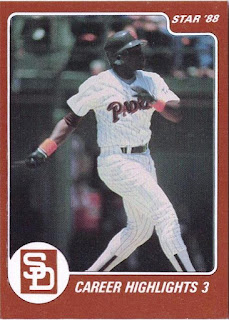 This is the third 'career highlights' card, and the third with a huge amount of text on the back. This one has a brief intro then talks about what Tony did in the 1985 season. 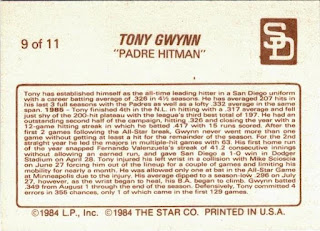 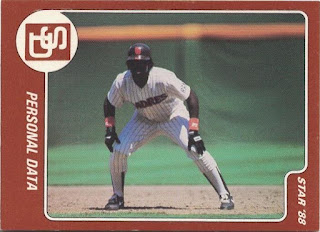 Yet again, Star decided to use a landscape-oriented photo and did nothing about the orientation of the logo. To add to the quirkiness, this time they rotated the template the opposite way round to the way they rotated it on the other card with a landscape photo.
The cardback is more about Tony as a person rather than summarising his career. There isn't much in there that is news to me, except for him being named San Diego Professional Athlete of the Year twice. Back when San Diego had NFL and NBA teams, there would be some competition for that.
And so, on to the final card in the set...
Card Number 853: Star Tony Gwynn "Padre Hitman", 1988; #11 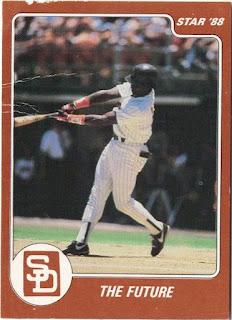 This card is slightly damaged. Maybe one day I will replace it.
What did the future hold for Tony way back in, wait, hang on, part way through 1987? 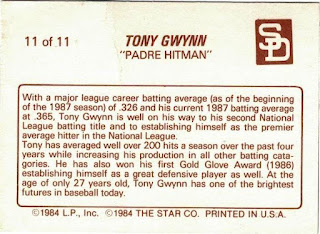 I mean, that's what the first sentence implies when it talks about Tony's "current" average. This explains why the stats on his Major League Stats card only went up to 1986. So, this set from 1988, was put together in 1987, only included stats up to 1986, and had a copyright notice saying 1984. Gotta love an oddball set!
However, their comment about Tony having one of the brightest futures in baseball was prescient. While this set was being compiled, Tony was on his way to picking up his second batting title. He would, of course, go on to win many more!
Total: 853 cards