Back in the 90s Topps released a number of ranges to try and fend off the competition from every other card company who all seemed to be doing innovative things that collectors liked. Some of Topps's new ideas really worked. A lot did not. Here are some card ranges that disappeared without anyone really caring very much.

Topps claimed these cards were "3-D so real, it's unreal". The cards were thick and plasticky and apparently afforded "infinite depth perception". They look OK. 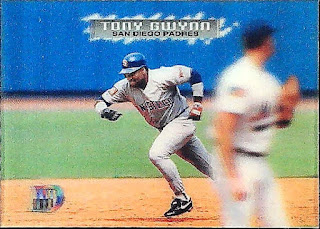 Look! Tony is literally running behind that guy!
The back goes for a computery 3-D effect with the design. It looks very 90s. Very, very 90s. 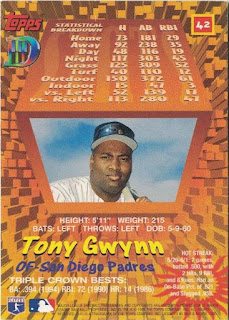 Topps Dimension III was a one-shot attempt by Topps. It was obviously a commercial failure, because Topps rarely kill a range after just one year.
Card Number 859: Topps High Definition (aka HD), 2000; #45
The "HD" range got two years and this card is from the first year that Topps issued them. Like Dimension III, these cards are thick plastic 'cards'. They are seriously hefty. Baseballcardpedia notes the plastic stock is 50 point. It's slightly thicker than a credit card. 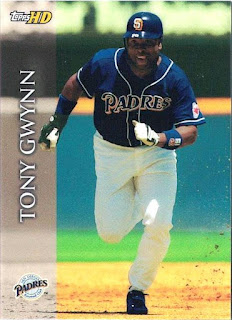 HD televisions were the cutting edge of television technology at the turn of the millennium. Topps were trying to get on the tech bandwagon for a change. Compared to the way other card companies embraced the emergence of the Internet and the growth in personal computing, Topps had been a bit slow.
The tagline on the card packets was "the game defined", as a riff on the idea of high definition. The cards had a high def pricetag too - 4 cards for $3.99.
Considering the concept of being at the cutting edge and the pricetag, the cards are a bit 'meh'. A grey stripe on the front and a boring stats box on the back. Was this card worth a whole dollar? 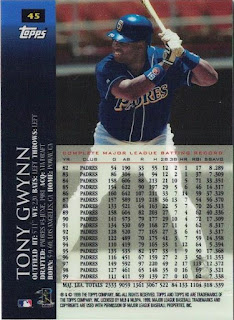 The range obviosuly sold well enough for Topps to try again the following year. But that was it and the range was quietly retired.
Total: 859 cards