Return to 80s week - a couple more from Fleer

Back on Wednesday I blogged five Fleer cards taken from the small 44-card sets that Fleer produced in 1988. The following year, Fleer issued some more sets. 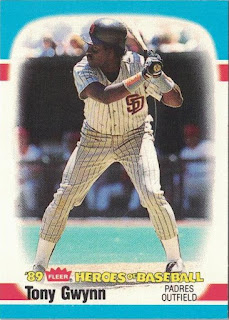 The soft focus fade on the edge of the photo and the colourful border make this a striking card design.
Tony often had a card around number 19 in these sets. This time his card was #20. The back keeps the soft focus cut out in the centre. The stats box is in pink and white candystripe columns - one of Fleer's preferred colour schemes for these sets. 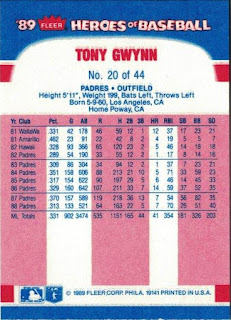 Considering they have bothered to include the three minor league teams Tony played for before his call up to the majors in 1982, it's a bit odd that they left Tony's stint in Las Vegas at the start of the 1983 season out of the stats. This is a good example about how card companies seem to forget about the games in Vegas. Maybe the idea that what happens in Vegas stays in Vegas applies to baseball stats too.
Card Number 893: Fleer Superstars, 1989; #21 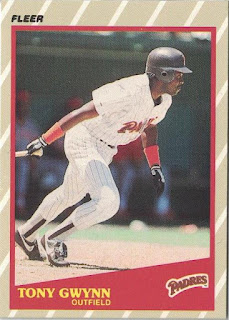 The greyish stripes on this card makes it visually similar to the flagship Fleer set from 1989.
There is a change of orientation on the cardback. And a truncated stats box just covering the preceding four seasons. And yellow! 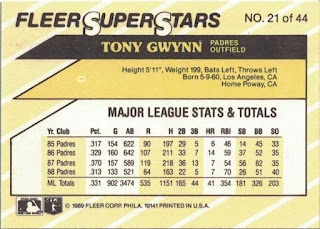 These little sets all had their own quirks. It's fun seeing them all next to each other.
And that's the end of this week of cards from the 80s!
Total: 893 cards
Posted by Jongudmund at 8:15 AM