Generally speaking I get my recently released cards from people in the UK Facebook groups breaking new product wanting to move on the cards they don't want. It seems that in the last couple of months the number of people buying boxes and ripping packs has really slowed down.

However, what counts as 'modern' for a "Modern Monday" post. Well, 2015 wasn't that long ago, even if it does feel like it was.

Come on, Topps! Card number 18 in an insert series? When you could so easily have given Tony number 19? I swear, sometimes it feels like you don't even try...

This insert series comemorated the first home run of several players. There were 40 inserts in both Series 1 and Series 2 of Topps's flagship set and both are numbered FHR-01 to FHR-40. Because, Topps, I guess.

We get a photo of Tony in the classic early 80s Padres road uniform on the front, along with the date of Tony's first major league home run. 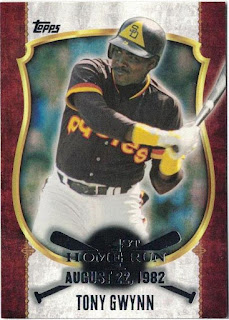 I was going to look up the date on Baseball Reference, but Topps have put details on the back. Should I fact check this? It is a Topps card... 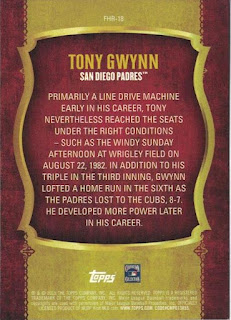 I went and checked. Tony hit a home run off Bill Campbell in the sixth inning. He had two hits that game and scored two runs.

That last sentence is an opinion rather than a fact. Did Tony develop more power later in his career? He was never much of a home run slugger even though he played through the power slugger record-chasing era. 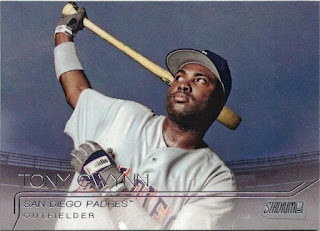 Whoah! That is a card. 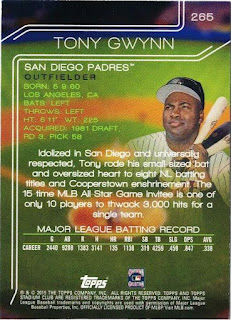 My only criticism of this card is that, like all modern Stadium Club cards, it's warping slightly.
But still, what a lovely card. Quite apart from the photo on the front, everything on the back is spot on, from the use of the word "thwack" in the write up to the one line of career stats, to the picture showing Tony with a handful of bats.
I know I give Topps a hard time sometimes on this blog -  in fact, even in the first half of this blog post! But in this case, I have nothing but admiration for what they have done here.
Total: 862 cards

Posted by Jongudmund at 2:13 PM