Mint! (The cards with the hole)

The blog title is a riff on an old advertising slogan for Polo mints, which were described as "the mint with the hole". What happened to the holes? Nobody knew. Then the manufacturer started selling little tubs of tiny mints called Polo holes.

This blog post is actually about Pinnacle Mint, cards that were sold with holes in. Well, some of them. Pinnacle Mint was a set that combined cards and metal coins. It wasn't a totally novel idea. Topps had made coins previously. But the combination, and the idea of using the cards to hold the coins was something different. 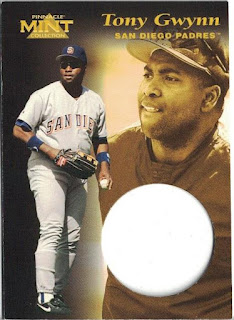 This is the base card. See the big hole? That was to fit a coin in. Each packet came with two cards and one coin. 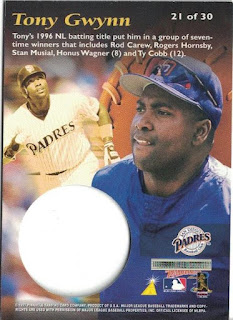 Obviously punching a big hole in a card means there is less space on the card for factoids or stats. Pinnacle binned off the stats and kept the factoid to a concise three lines.

There were four different coins to collect in the packs - bronze, nickel, silver plated and gold plated. There were also 'redemption' coins that could be claimed in either solid silver of solid gold. Richard included one of the bronze coins from this set in the recent parcel that he sent me. Here is what it looks like mounted in the card. 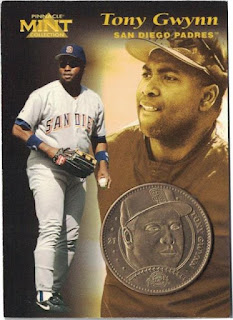 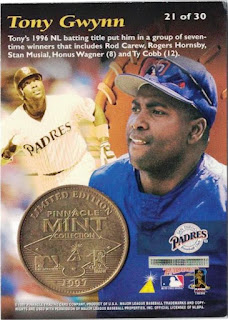 There were also three parallel versions of the cards with large foil coin-sized stamps on them, also in bronze, silver and gold.
Card Number 855: Pinnacle Mint (Bronze), 1997; #21 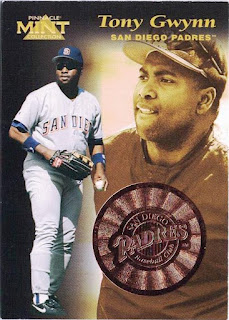 The big foil stamp is only on the front. This means the back of the card is surprisingly clean. 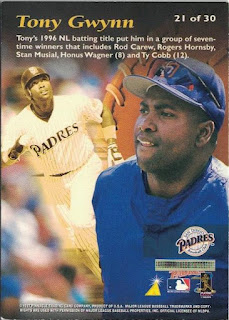 Presumably this was a reasonably successful range for Pinnacle, as Mint made a reappearance in 1998, which would turn out to be Pinnacle's last year of trading.
Card Number 856: Pinnacle Mint, 1998; #8 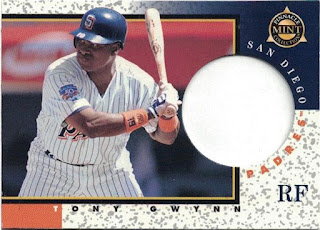 This 'boxy' background design is similar to several other Pinnacle ranges in 1998.
On the back Pinnacle decided to opt for stats over multiple photos. There is a lovely portrait of Tony and a clever way of displaying his season stats as well. 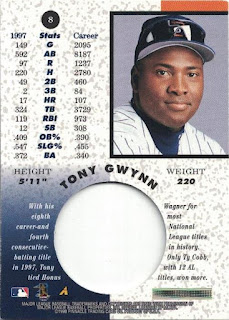 Although this card gains bonus points for the way the stats are laid out, I'm going to ding it a point for splitting the factoid either side of the big hole. If they had gone for two sentences, one on each side, then it would have looked better.
I have yet to acquire the coin from 1998 to display in the hole. But I do have the bronze parallel of this card, as Pinnacle went all parallel-happy again.
Card Number 857: Pinnacle Mint (Bronze), 1998; #8 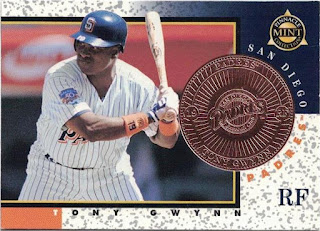 This time the space on the back of the card that would have been the hole has been filled with the team logo. 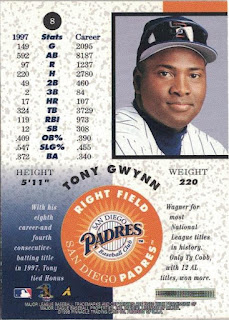 This was the last year that Pinnacle Mint was produced. The company went belly up in the autumn. The Pinnacle brand has since been purchased and semi-revived as one of the zombie brands that Panini have reanimated. Of the many sub-brands that Pinnacle had, it seems very unlikely that the Mint concept of cards and coins will ever be brought back by Panini. But who knows what the future holds!

Posted by Jongudmund at 8:32 AM