One Card Only - caricature All-Star 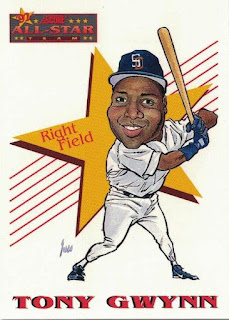 This card is everything that was right about the baseball card hobby in the early 90s. It's cheeky. It's fun. It's different. It's just a great card.
On the back we have the starting line-up for the national league team in 1992 and a nicely phrased summation of why Tony made the team. 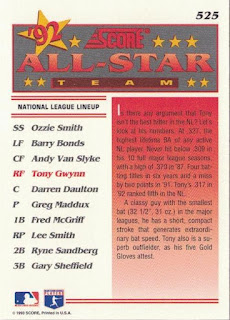 Some of the names on that list need no introduction. Ozzie Smith, Barry Bonds, Fred McGriff, Gary Sheffield, Ryne Sandberg and Greg Maddux were dominant players at the time. Andy Van Slyke is less famous, but this was the second of three All-Star appearances for him. Darren Daulton was also a three-time All-Star and was part of the Marlins team that won the World Series in 1997. He passed away in 2017 at the age of 55. I wasn't familiar with Lee Smith either, but it turns out he held the record for the number of saves in Major League Baseball from 1993 until Trevor Hoffman passed his figure in 2006. He is currently third on the all-time list, behind Hoffman and the current record holder Mariano Rivera.
All in all, that was quite the All-Star team in 1992!
Total: 860 cards