We are a week away from Christmas, and this song lyric has been in my head. So it seems an apt title for a blog post about Tony's appearances on checklists.

Some player collectors don't count checklists. That's their prerogative. I think they're missing out.

This card takes me to 500 cards over my original target of 394 cards! 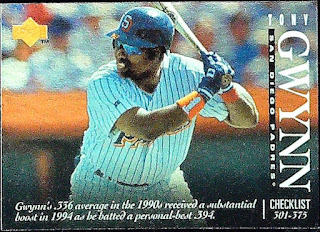 On the front there's a reference to Tony's famous batting average in 1994.
I enjoy reading the list of names on these checklists. Among all the really famous names are players who have been long-forgotten, like Chuck Carr and Pat Rapp. 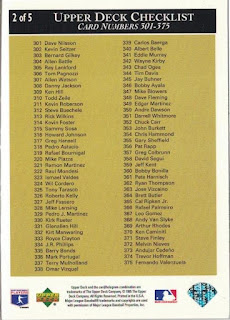 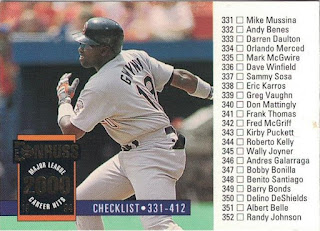 Some of the random forgotten players on here include Phil Leftwich and the frankly amazingly named Hipolito Pichardo! 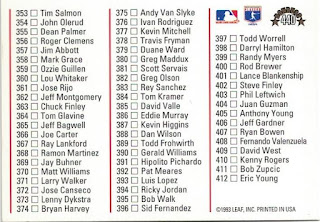 Hipolito pitched 350 games in a ten year major league career for the Royals, Red Sox and Astros. He also had 103 baseball cards in his career, according to TCDB. Phil Leftwich had 39 cards, which is actually more than the number of games he pitched in the major leagues (34 games in 3 years for the Angels).

This is really a 'cameo card'. It's not about Tony per se - DonRuss put a photo of  different teams on their checklists. But Tony is in the photo walking behind Gary Sheffield. There seems to be a giant patting Gary on the head as well. That guy must be about 6 foot six. 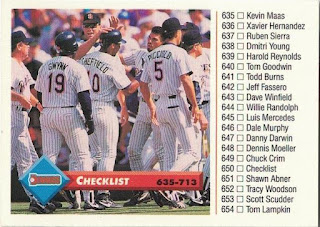 The winners in the peculiar names category this time around are on the front - Chuck Crim and Scott Scudder both sound like low rent villains from a comic book. They're joined on the back by William Pennyfeather! But the name that really stood out on the back was Tony's brother, Chris Gwynn, who was #657 in the set. 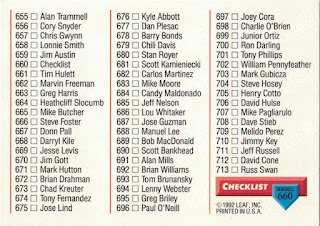