The sheer volume of cards being produced at the turn of the Millennium means there are loads of cards in my collection from the year 2000. Here are some from Topps.

I know I could have waited and put this in a 'Tuesday Twins' post, but hey, it's in this post instead. 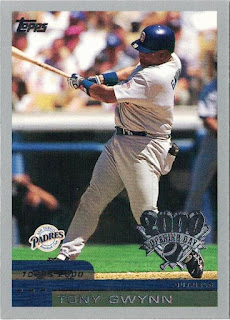 The Opening Day set had a silver border around it and the foil stamp saying opening day. I wish Topps would go back to foil stamps instead of photoshopping in Opening Day logos.
This card has the same number as the regular flagship set, which doesn't always happen with Opening Day sets. 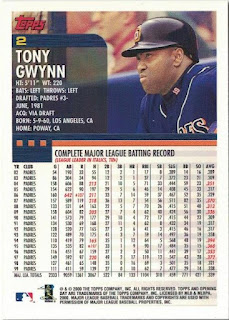 The back is uninspiring.
From a cheapie parallel set to something a bit odder.
Card Number 877: Topps Finest Moments refractor, 2000; #FM3 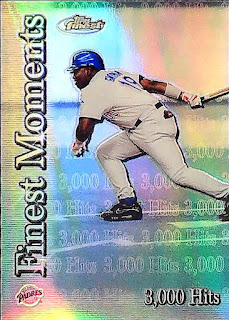 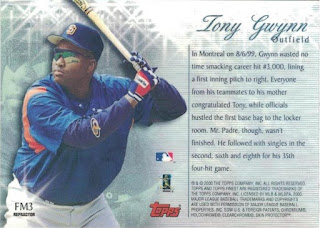 Also, a bonus point for Topps actually putting the word 'refractor' on the back under the set number. That's the handy information that often gets left off cards. 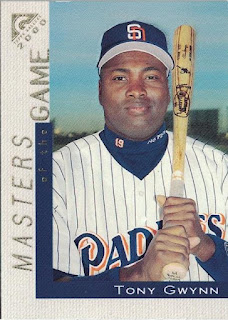 Topps used a similar photo on their Magic Moments cards in the flagship set from 2000.
The back has a confusing array of fonts and, frankly, looks a bit of a mess. 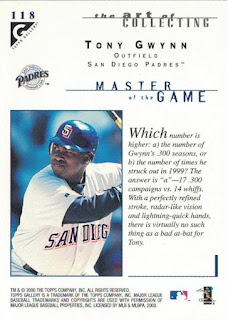 Reading the question on the back, it was kind of easy to guess the answer. Of course it would be A. Any kind of question where one of the options is a ridiculously low number of strike outs in a season, the number of strike outs is always lower than the other thing it's being compared with. Always.
Card Number 879: Topps Stars, 2000; #60
I have worked with a number of graphic designers in my career and I feel I am able to interpret the intentions of designers fairly well, even when they don't work out. I think the idea here is that the player is illuminated by searchlights, like a film star would be, and that is casting the player's shadow. It doesn't quite work because Tony is running a base path and there is a person in the background in the photo, but Topps have never let the results interfere with their vision. If the card ends up looking like there is some kind of interdimensional rip in space-time going on, then, well, print it anyway. 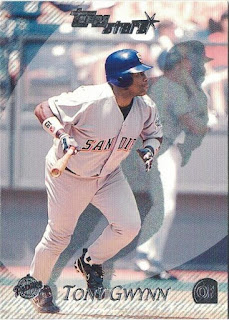 Having said all that, I quite like Topps Stars. On the back we get a batting donut picture, again. That's been a recurring theme this week! Weirdly Fuji lists the other Tony Gwynn card from this set in his list of cards featuring batting donuts. So, again, that's two cards from the same set with a picture that includes a batting donut - as was the case a few days back! 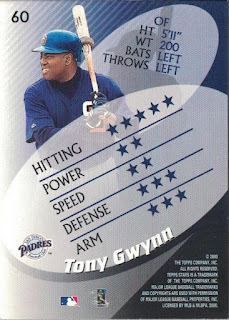