There is a fine line between "innovatove" and "gimmicky". Today's cards cross that line because unlike almost every other baseball card ever, they weren't sold in a packet. They were sold in a can.

In 1997 Pinnacle Inside cards were sold in cans with 24 different designs on the outside. One of the cans had Tony printed on it. However this card would have been inside a can. 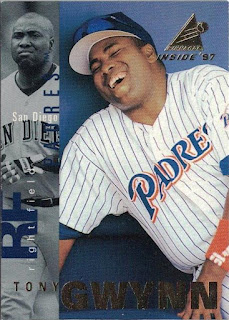 Tony is guffawing in the main photo. It really shows his fun-loving side. He has a more serious expression in the black and white photo to the side. The "TM" after the word Padres makes it look like he has a blue neck tattoo. 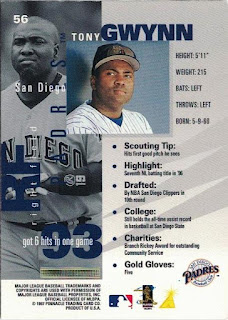 This could be a great cardback.  It has a nice lay-out with interesting info. The bullet points don't quite line up though. Also the factoid on the left about his 6-hit game is sort of marooned there.
Pinnacle carried on canning cards the following year.
Card Number 875: Pinnacle Inside, 1998; #37
In 1998 there were 23 different cans, and again, one had a picture of Tony on the outside. 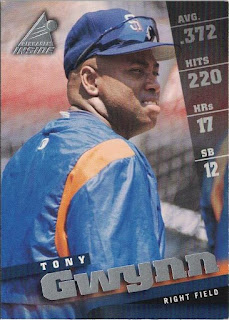 It feels like Pinnacle couldn't match the photo from the previous year, so they didn't try. The stats down the left hand side are from the previous season, but they don't explain that.
A slightly better photo on the back and a better lay-out for the tidbits of information. 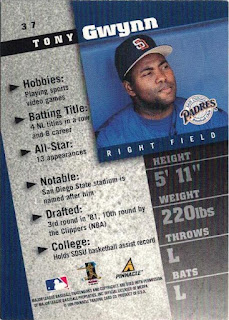 There is some new information on the back including that Tony's hobby was playing sports video games. This seems to be a popular past-time among many professional sports players.
1998 was the last year that Pinnacle canned cards, because the company collapsed that year. Like Pinnacle Mint, this gimmick has yet to be resurrected by the current owners of the brand, Panini.
Total: 875 cards

Posted by Jongudmund at 7:29 AM