There are a surprising number of references to fires in Christmas songs. And the background of this card makes it look a bit Christmassy to me, because it reminds me of a stained glass window. This card was an early Christmas present from Mark Benn - thanks Mark! 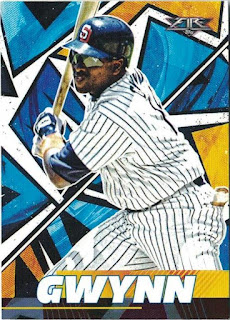 Topps Fire doesn't seem to have fans like their other sets. Mark, who sent this to me, is the only person I know in the UK collectors group who opened any packs of Topps Fire.
I like this design. It's colourful. It looks a bit different to other sets put out this year. True, Topps are doing their usual thing of not showing the player's face clearly and, apart from the San Diego logo on Tony's helmet, this may as well be an unlicensed card considering the pose they have chosen. But it's still a nice card. And yet the set doesn't seem to be appealing to many collectors. 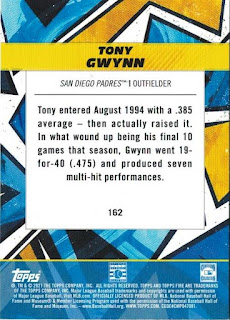 I have no complaints about the cardback either - for a retired player, one factoid is all that's necessary. I am obviously interested in the 1994 season and postulates about what Tony might have achieved if the season had not been cut short. In He Left His Heart in San Diego, a mathematicican called Michael Schell calculated that if Tony had continued on the streak he was on when the season was prematurely halted, he would have broken .400, and might even have beaten Ted Williams's .406 batting average. This choice of stat on the cardback supports that theory.