I had an unexpected suprise in the post last week, a small box of cards from Gawain that had been in a job lot he bought, and that he sent on to me. While most of the cards were ones I had, there were some I didn't have, including one that I almost passed by as I looked through them. The moral is always keep one's eyes peeled for parallels! 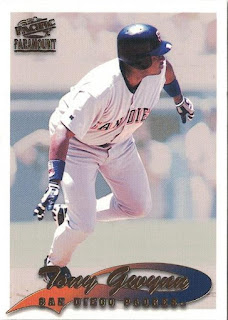 The gold foil doesn't show up that well on the scan, but it looks great in my binder next to the regular version which has silver foil on (and that I blogged about over a year ago!)
I don't know what the frequency of gold parallels was, but I have discovered that Tony was on both the packets and the box the packets came in! 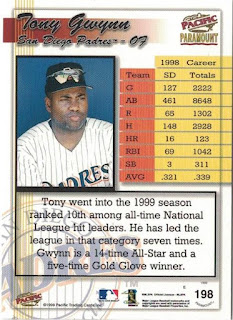 I like stats in columns instead of rows. I find them a lot easier to read, so this card gets a bonus point for that!
Total: 863 cards