The case of the missing base card

I have some gaps in the base card section of my collection. These are spaces that it would be very easy to fill if I lived somewhere with card shops and card fairs, like the ones I read about on other collector's blogs. I have to settle for being patient, knowing those cards will turn up some day.

Meanwhile I stumble across parallels and alternative versions of those missing base cards which accentuate the gap in my collection by sitting 'either side' of an empty pocket in my folder. Oh, well.

This card is from Tony's final season before he retired. 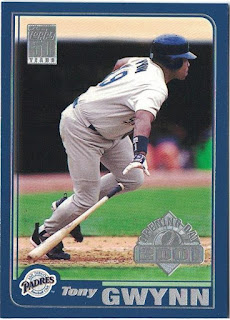 True to form, Topps have managed to find a photo where you can barely see his face, or the number or name on his uniform. It's from the era when Topps released their Opening Day cards with a different border and put a big foil stamp on it too. 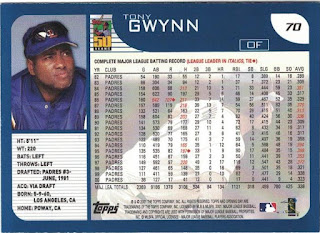 The back is a huge stats box over a watermark of some of the photo on the front.

The regular flagship cards that year had a green border. This was only four years after they released the 1997 set with its green borders. I don't have the regular base card - that's the whole point of this post - but I do have the Chrome card. 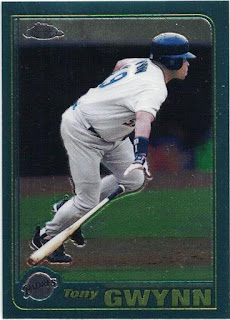 The Chrome effect makes Tony look a bit 3D. In this version he is flinging that bat away! 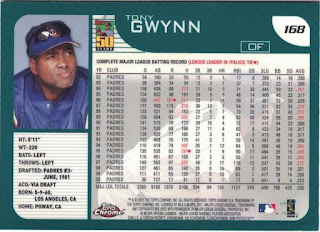 The back is the same lay-out as the Opening Day card, and presumably the regular card as well.
When I do fill the gap, it will be satisfying, even if it won't be hugely exciting because I already know what the card will look like!

Posted by Jongudmund at 7:55 AM