The other night I was half watching the game between the Mariners and the Angels and the camera panned across the squad numbers that have been retired by Seattle. There was number 42, same as everywhere else, then in a palindromic manner number 24, for Ken Griffey Jr, and than finally number 11 for Edgar Martinez. Seeing the big outline of a shirt with Martinez's name on it made me think of this card:
Card Number 250: Upper Deck Collector's Choice, 1996; #2 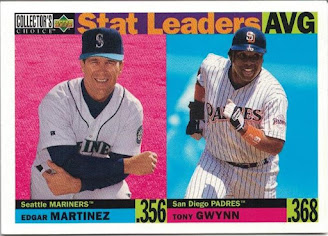 Edgar and Tony were the leaders in batting average in their respective leagues. This isn't the only card that Tony shared with Edgar - they were also paired on a Leaf checklist in 1996.
The back of the card lists the top ten hitters in each league. 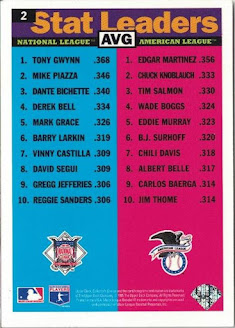 There are some great names in those lists including famous future hall of famers, and some other lesser well-known but highly memorable names. (My puerile Welsh sense of humour regards Chuck Knoblauch as a funny name.)
Edgar Martinez had a good season in 1995, including a tremendous performance in the divisional series as the Mariners made the post-season for the first time in their history. The success of the team in 1995, particularly centred on Edgar's game-winning double that took the Mariners past the Yankees to the Championship series, paved the way for a new baseball stadium in Seattle. That double has even been described as the hit that saved baseball in the city.
Last year Edgar became the second player to enter the Hall of Fame as a Mariner, following Ken Griffey Jr.
A couple of years after this card was produced, Tony shared a similar card with another giant of the game who has also had his shirt number retired and been elected to the Hall of Fame.
Card Number 251: Upper Deck Collector's Choice, 1998; #253 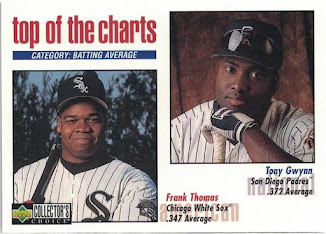 While the batting average leaders card isn't as colourful as the one in 1996, those are some nice photos. They have positioned Tony's portrait slightly higher than Frank Thomas's. His average was a bit higher too. 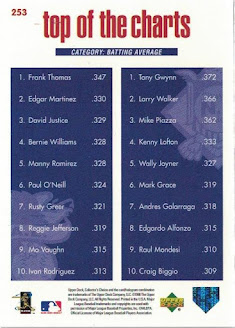 Edgar Martinez is listed on the back of the card as he had the second best average in the American League. The only other National League player to make both lists was Mike Piazza.
Frank Thomas was known as The Big Hurt and consistently batted over .300 during the 1990s. He also found time to be a movie star (a small but important role in the film Mr Baseball which starred Tom Selleck) and was the face of a computer game and a pinball machine. Having played most of his career with the Chicago White Sox he became the first White Sox player elected into the Hall of Fame in his first year of eligibility. He also has a statue outside the stadium - another similarity he has with Tony Gwynn.
Total: 251/394
Posted by Jongudmund at 10:54 AM