One Card Only - Tony's Idol

In their 1992 set, Pinnacle included an 8 card series featuring the baseball idols of some well-known stars of the game. Tony was paired with Willie Davis, who played for the LA Dodgers for 13 years from 1960. (He was also very briefly a Padre toward the very end of his career.) 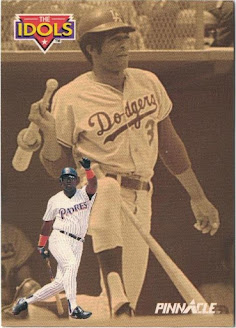 Tony was taken regularly to Dodger Stadium when he was growing up and saw Willie play, although it's doubtful he would have seen Willie in the World Series winning seasons of 1963 and 1965. He might have seen one of the games in Willie's 31-game hitting streak in 1969, though. 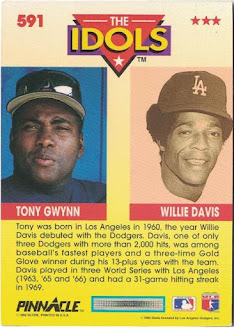 There is a lovely story that Willie Davis was invited to take part in an "old timers" game at the San Diego State University stadium when Tony was head coach for the Aztecs. According to this article, Stephen Strasburg helped arrange it when he was pitching for the Aztecs  (The date given in that article must be wrong because that was before Strasburg was born!).

Tony was apparently too nervous to speak to Willie because he was still to much in awe of his idol. I like that story because it just shows Tony's humility - after all he had achieved in the game, he still felt shy about meeting one of his own baseball heroes.