DonRuss Fan Club was an insert-heavy medium-sized set that was only released in 2002. Having said that, it offered collectors some nice cards, including two Tony Gwynn cards in the base set, despite him retiring at the end of 2001. Along the way it earned a few bonus points for itself as well. 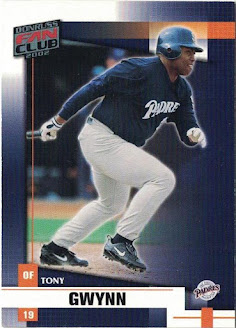 Bonus point in its favour - set name on the front! That's always helpful. 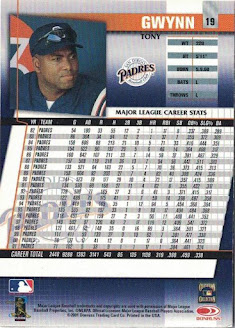 Nineteen more bonus points in its favour - this is card number 19 in the set!

(I have looked at a lot of baseball cards during the course of this blogging project and if I was going to start rating them, every #19 card would automatically earn 19 points!)

There was also a run of cards of players dubbed "Fan Club Favorites". Tony is still many Padres fans favourite ever player, so it probably didn't matter that DonRuss included him in this little subset even though he had retired. 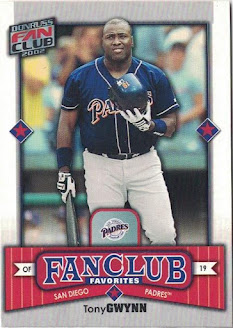 It's an odd photo, set within a really nice framing effect 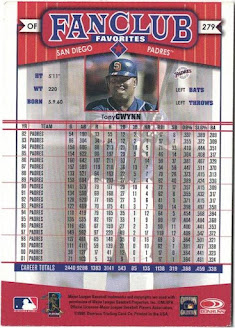 Given that Tony's base card already had a massive stats box on the back, this cardback looks like a missed opportunity. This would have been the perfect space to write in something about why Tony was a "Fan Club Favorite". However, the framing of the cameo portrait while the rest of his photo is washed out isn't something I've seen before on a cardback.

Posted by Jongudmund at 8:15 AM

Email ThisBlogThis!Share to TwitterShare to FacebookShare to Pinterest
Labels: #19, 2002, DonRuss