Here are 3 random, unrelated cards, that I'm posting because it's Monday and we can all use some random drops of joy in our lives on a Monday. 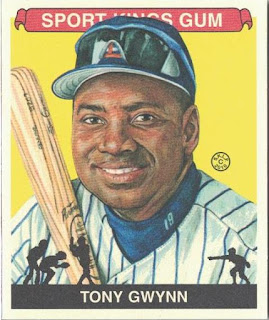 There are two versions of this card. This is the slightly smaller version. It's not as small as a Topps Mini, but it's smaller than a regular sized trading card. This is also another entry into the 'When is a baseball card not a baseball card?' category. The Trading Card Database lists this as a 'multi-sport' card. The series includes famous sportsmen from across a range of sporting activities.

Sport Kings Gum was one of the ranges brought out by the card manufacturer Goudey before the Second World War. The brand got revived several decades later, and this is from when it was an independent little company. It has also been part of Leaf. When this was produced the company had no affiliations with Major League Baseball, but look at how cunning they have been in their portrait of Tony - on the front of his cap are his pioneering sunglasses, and you can just see a little bit of the SD logo.  That's sneaky! 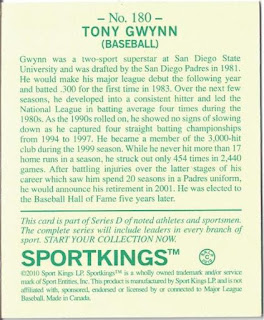 On the back there is nice little bio and we also learn the card was printed in Canada. Just another odd little aspect of this odd little oddball card. 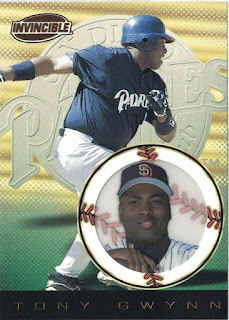 I have one card in my collection so far which is part acetate. This is the card. That little window with Tony's face is actually a window. Pacific are one of those card companies that created little masterpieces that no-one really asked for. Die-cuts and gold foil and see-through bits and all kind of things to make their cards stand out. This may be an unpopular opinion, but the hobby is poorer without Pacific. 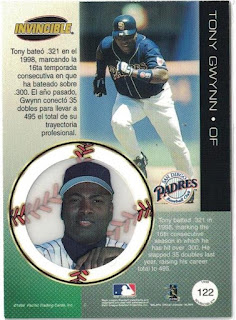 There's the back. There's some blurb in Spanish as well as English and the picture of Tony is mirrored because it's printed on acetate. It's weird to think this is the view Tony would have had of himself if he looked in a mirror. He is properly legging it in that photo as well. That's a man on a mission to reach the next base!

The cards are foiled on the front, so look nicer than in this scan. 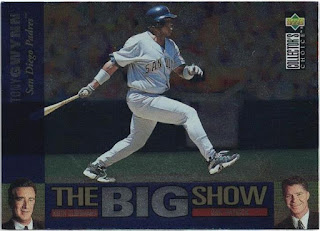 The back has one of the most confusing layouts I've ever seen on a baseball card. It's another 90s design classic! 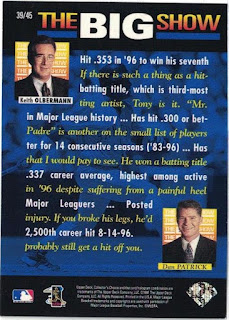 Basically the text is interlinear as if the commentators are talking over each other. It's horrible to read and I can't work out which person is saying what. Separately they are saying:

"If there is such a thing as a hitting artist, Tony is it. "Mr Padre" is another one the small list of players that I would pay to see. He won a batting title in '96 despite suffering from a painful heel injury. If you broke his legs, he'd probably still get a hit off you."

Am I the only one who feels a slightly sinister undertone in that final sentence?

Keith Olbermann has also been a political commentator but he is back on ESPN now. In He Left His Heart in San Diego Keith recalls meeting Tony Gwynn, who called him Mr Olbermann until Keith asked him not to. They became friends and Keith knew how excited Tony was to be playing at Yankee Stadium in the 1998 World Series. He asked the Yankee stadium announcer, Bob Sheppard, to record his intro for Tony Gwynn and then put it in a talking photo frame and gave it to him. Apparently Tony was so taken by it, that he kept the frame in his trophy cabinet next to the silver bats he won.

That's your Monday Mixer. Have a great day!