I want to give a shout out to Laura, who I've met through the Baseball Cards UK Facebook Group. Laura has her own YouTube channel, LJ's Clubhouse. She's also run some box breaks for group members.

Laura is a keen Yankees fan, and really likes Derek Jeter. (Who doesn't, really? When all is said and done, the man is a legend.) She is also the person who screenprinted me my .394 t-shirt, as worn on 9 May to commemorate Tony's birthday. 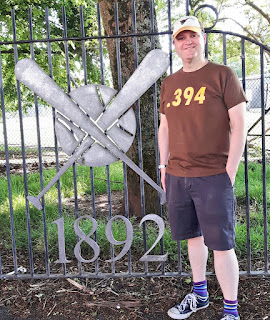 This photo was taken next to a park in Grangetown in Cardiff. Baseball was historically a really important game in Cardiff, as can be seen in this photo from 1953, when Grange Albion played Penylan at Roath Park Recreation Ground at the bottom of Penylan Hill.

The Roath Local History Society estimates a crowd of about 6,000 people turned up to watch the game.

Anyway, Laura is the person who made me the t-shirt as a bespoke print (See her other work here.) She is also the person who sent me the two Tony Gwynn Cards I'm going to profile today.

Card Number 98: DonRuss Diamond Kings, 2019, #37
I have a few Diamond Kings cards in my collection. I like this as a photorealistic painting, rather than a portrait. 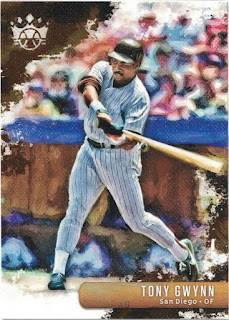 Unlike other Diamond Kings releases, I can't see an artist's name on this. There's no information about the artist on the back, either. 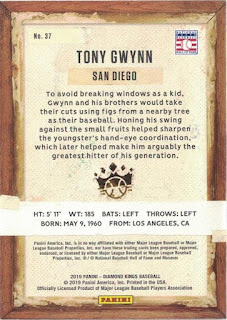 There is an interesting factoid though, about how, as a kid, the Gwynn brothers practised their hitting using figs instead of a baseball. 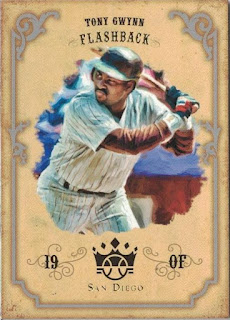 It's a similar photorealistic painting with a nice border. This is a handsome card and shows that Panini era DonRuss cards can actually be very attractive. 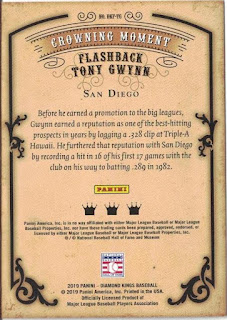 The back is similarly clean and classy. The definition of a 'Crowning Moment' seems to be Tony's call up to the Bigs. What this misses out is that Tony wasn't the first choice call up from Hawaii that season. Alan Wiggins was called up a month before Tony because his batting average was quite a bit higher. Then Tony went on a streak and a month later, when another gap opened up in the roster because of injury, he had improved his average to .328.

So, a big shout out and thank you to Laura for these cards. Tomorrow we hit the century of cards on the blog!