One card only - Fleer Grassroots

I can't express how much I adore this baseball card. If I could only pick 10 cards to keep out of my Tony Gwynn binder, this would be the first one I pick. 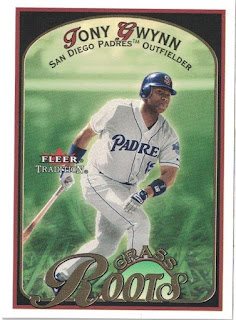 The scan doesn't really do it justice. I can't really define what makes it so appealing. Maybe it's the way Tony's name follows the arch of the frame. All I know is that when I picked it up while going through a job lot, my first response was 'Wow!' 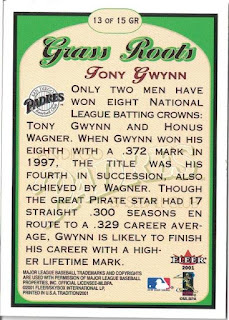 It has a nice, handsome card back too. There were 15 cards in the 'Grass Roots' insert series within the Fleer Tradition set. I'm not sure what the reference to 'Grass Roots's is about. The write up on the back offers no clues as to why they chose to call it 'Grass Roots'.

This was from Tony's final season and predicts Tony would finish with a higher lifetime batting average than Honus Wagner. When Tony retired, the Fleer cardback writers were proved correct as he finished with a career total of .338 with 19 seasons in a row posting over .300; two more seasons than Wagner.

Fleer Tradition cards were an equivalent to Topps Heritage, but are sadly no longer produced. I'm just glad to have this lovely card in my collection.