One (Hundredth) Card Only - DonRuss Tribute

We have reached the century of cards shown on this blog. I thought it would be fitting to pick one of the shiniest cards in my possession to be the 100th card.

Card Number 100: DonRuss "Tony Gwynn Tribute", 2015; #4
Tony died in 2014 and the following season Panini included a five card insert series into its DonRuss range. This insert series is so shiny it broke my scanner! 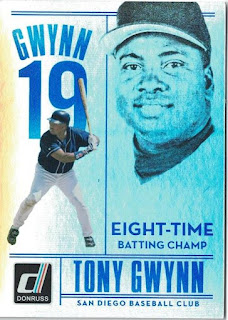 It looks silver until you try and photograph it and turn your phone to a slight angle. 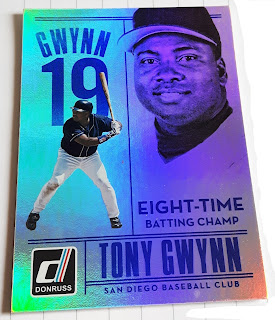 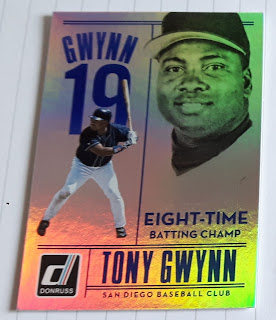 The card back is much easier to scan. 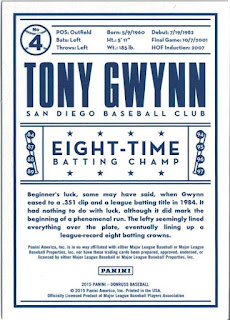 This card chronicles Tony's 8 National League batting titles. The others in the series, which I am yet to acquire, cover his 15 appearances as an All Star, his induction in the Hall of Fame in 2007, his career hits total, and his career batting average. Sadly they didn't include his highest batting average, which would have been perfect for this blog.

So, we are a hundred cards in, and I'm not getting bored yet. There's some fun coming tomorrow in the Monday Mixer!