Most 'ball' sports have their own, distinctive version of a 'ball'. Baseballs are instantly recognisable because of the stitching along the seam. It stands out.

It also makes a very good design motif for baseball cards. Today I've chosen two examples where the distinctive look of baseballs has been used by card designers. 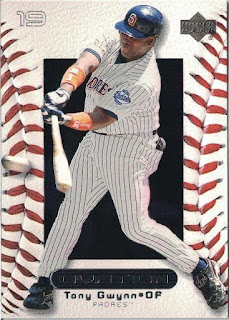 Not only is this card bordered by the seams of a baseball, there's also a baseball in the picture that looks like it's just about to get hit!

The back is fairly minimal, perhaps to make up for how nice the design is on the front. The blurb mentions Tony's 3,000 hits and his Gold Glove Awards. 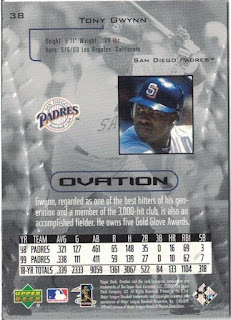 Two years before this card was produced a different card company used a similar design. 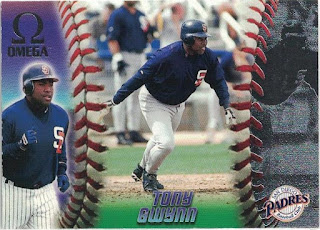 I am intrigued about the identity of the guy in the Padres uniform standing behind Tony in the central photo. In 1998 the next guy on deck after Tony was almost always either Ken Caminiti or Greg Vaughn. It's weird, but even before I checked I thought to myself, 'that looks like Greg Vaughn'. I think this is likely to be a photo from 1998 as the cardback talks about his early season form.

Also, I may have to try and track down a hobby box of this set, because Tony's card was the one featured on the top!

The cardback is the epitome of Pacific cardbacks in the very late 90s, even down to the drop shadow being used on Tony's name. 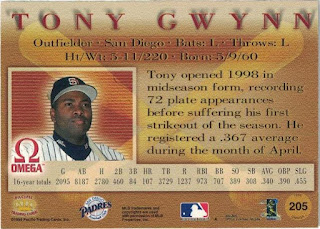 The crossed bats are quite a cool watermark image on the back. It reminds me slightly of the skull and crossbones of the Jolly Roger.