"Starquest" feels like it should be a subset of a science fiction set, not a baseball card set. But then it wouldn't be on this blog would it?

Starquest was a subset of inserts produced by Upper Deck in their Collector's Choice range for two seasons towards the tail end of Tony's career. (The theme re-emerged in 2008).

Card Number 127: Upper Deck Collector's Choice, 1998; #SQ19
I find the "STARQUEST" lettering on the left hand side of the card really hard to read the way its organised here. I keep reading it as STEASR or TEAST. 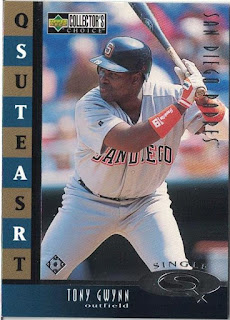 Horrible lettering juxtaposition aside, the front is relatively unremarkable. This is actually a subset within a subset as it is listed as a Starquest Single, hence the word 'single' above the Starquest logo. In their quest to make collecting their cards as annoying as possible, Upper Deck released all these cards as versions saying 'double', 'triple' and 'Home Run' on, in varying degrees of rarity (I presume, based on the lack of pictures for the other versions on Trading Card Database, and because I have two copies of the "single" version).

Upper Deck persevered with the terrible lettering on the back. It's no better a second time around. 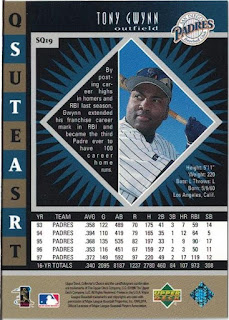 However, I do dig the fact that this is Starquest card number 19! That was Tony's number, and will never be worn by another Padre. I hope it wasn't a fluke of the numbering system and this was a deliberate choice by Upper Deck. It's a classy touch.

Although Tony wasn't much of a home run hitter, this card mentions that by the end of 1997 he was third in Padres franchise history. The 1998 season would be the one where he would end the year belting a home run in Yankee Stadium during the World Series.

As 1998 was a special season for the Padres, it feels fitting that Upper Deck released a second Starquest card featuring Tony that year. 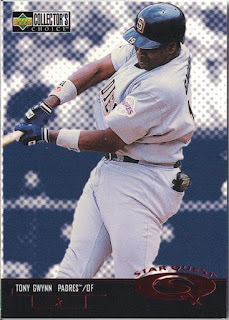 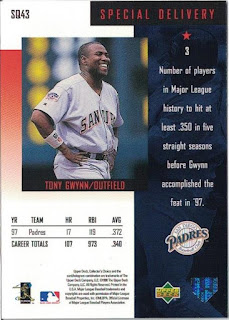 Overall it feels like this is a needlessly complicated set to try and complete. It's a nice photo of Tony with a big smile on the back.

Moving on to 1999, and Starquest was much simpler.

Card Number 129: Upper Deck UD Choice, 1999; #SQ8
Collector's Choice became UD Choice in 1999. There were only 30 cards instead of the 90 base set and additional multi-paralleled 30 cards released in 1998. The regular base was a very fetching shiny blue. 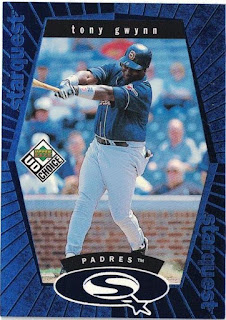 That low wall with the recognisable brickwork behind Tony features in a lot of photos of him. There was a low wall behind the plate at Jack Murphy Stadium, so maybe that's why it appears in so many photos.

The back of the card is relatively unfussy, but they could have placed the card number between two rays and they didn't need the bio data. They cropped and reused the front image on the back, which is something I associate more with Panini-era DonRuss cards. 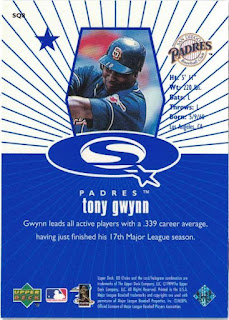 Interesting factoid that Gwynn was the leading active player for career batting average when this card was printed. His overall batting average would drop .001 before he finally retired three seasons later.

There were three different parallels of this card produced, in green, red and gold. But compared to the previous season, that feels very restrained.