The recent influx of cards into my collection has included quite a few parallel versions of cards that have featured already on the blog. Here are a few more from the various Upper Deck ranges. I've included links to where the other version was blogged. 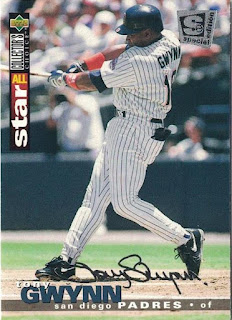 Special Edition was Upper Deck's third release in its Collector's Choice Range, after Series 1 and Series 2. Like the rest of the cards in the range, parallel versions with silver foil and gold foil signatures were released. The gold foil signatures were a lot rarer. The 'Special Edition' logo (top right) was recolourised for this silver signature release. Ironically, the silver signature scans black!

The back has a photo that is definitely in the top ten photos of Tony on a cardback. You can almost hear him saying "Heeeyyyyy, you guys!" 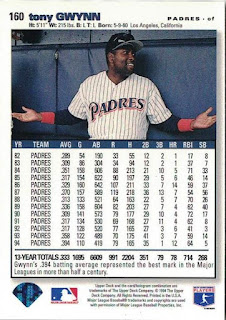 If every parallel had a photo that good on it, I would have a lot more appreciation for parallels. 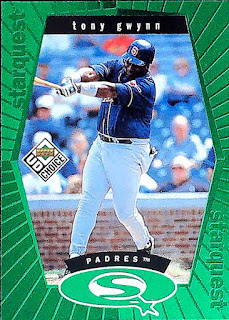 UD Choice was Upper Deck's late 90s rebrand for Collector's Choice. It lasted for one year and was replaced the following year by the MVP range.
Every pack of UD Choice cards had one Starquest card in it. The base cards were blue. The green versions were inserted at a rate of 1 in 8 packets. There were also red versions inserted 1 in 23 packets and gold versions sequentially numbered to 100.
The dull cardback is made up for by the shininess of the front. The sleeve logo of the Swinging Friar is quite prominent in the cropped version of the photo on the cardback. 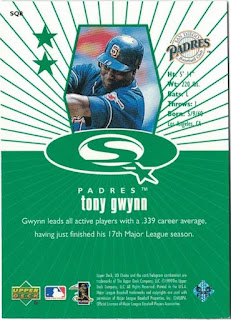 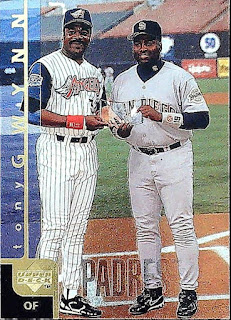 Aside from being shiny holofoil, this card doesn't have the little logo denoting 'Ken Griffey's Hot List' that is on the regular card. The presentation marks the first time the Padres played at Edison field in Anaheim. The Angels player presenting the award is Eddie Murray.
Apart from the set number, the back is exactly the same as the regular release. 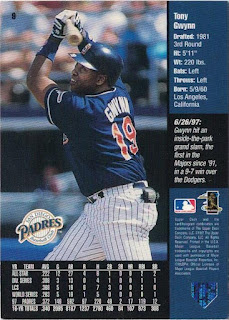 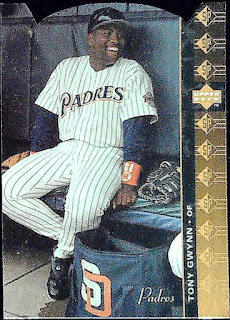 In addition to all 200 cards in the inaugural SP set being holofoil, there were die-cut parallels inserted at a rate of 1 in every pack. It's not the most imagintaive die-cut, with just a chunk taken out of the top of the card. This is an overhead scan. If you want to see how dark this would look on a flatbed scan, then that's what I used when I blogged the normal version of this card.
SP went for the minimalist approach on the card back. The photo has been cropped so tightly the base path Tony is running on isn't visible. 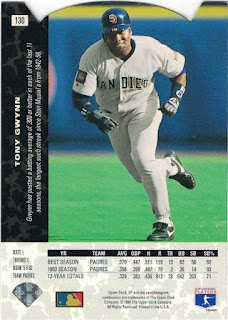 And that's the Tuesday Twins for today!
Total: 821 cards

Posted by Jongudmund at 8:34 AM