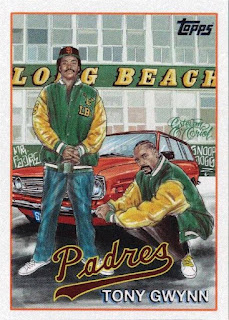 Firstly, it's artistically very good. Secondly, it draws on part of Tony's life that is often overlooked in these Topps projects and establishes a personal connection with the artist. Snoop Dogg attended the same high school as Tony, Long Beach Polytechnic in Los Angeles. There are several photos of Snoop posing with a car in front of the school in the way Tony is depicted here. Snoop has drawn himself alongside his high school's famous alumnus, almost genuflecting towards him.
Would Tony and Snoop have been friends in high school? Maybe not, actually. Another celebrity who attended Long Beach Poly, Cameron Diaz, claimed that she bought weed off Snoop, who was a year above her when she was at the school. I doubt Tony would have hung out with anyone who was selling drugs. However, Tony did have a musical side. He sung some backing vocals on one of his daughter's records. So, who knows, maybe he and Snoop would have collaborated if they had been classmates.
The back of the card contains none of this, and the bio for the artist is rather sanitised. 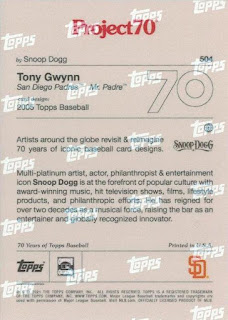 I had decided not to buy any more Project70 cards. My resolve was weak when it came to this. It's also the 21st card released in 2021 that I have added to the collection, which has a nice synchronicity to it.
Total: 842 cards
Posted by Jongudmund at 7:54 AM