In the 1980s Leaf was DonRuss's imprint for the Canadian market. Leaf cards were near-identical 'twins' of DonRuss cards. 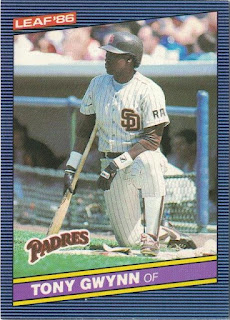 Tony is watching his team-mates batting to try and suss out the pitcher's arsenal of throws. His look of concentration here would translate into a tendency to swing and make contact with the first pitch he faced when he went up to the plate.
The back of the card also follows the DonRuss template, but with some French on there for the bilingual Canadian market. 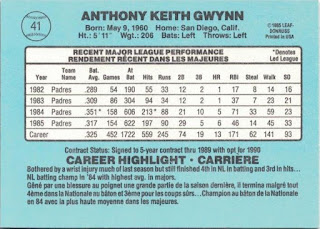 There is mention of a wrist injury in 1985 that hampered Tony's attempt to defend his 1984 batting title. DonRuss / Leaf liked to mention this wider context to explain the figures. Tony had quite the list of injuries catalogued on their cardbacks.
Card Number 840: Leaf, 1987; #235
The famous "tyre tread" design got reused North of the border. 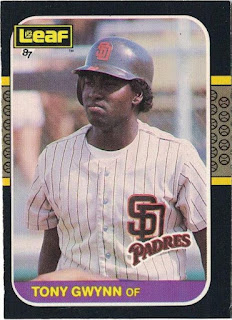 This card illustrates something called "poor centering". This is very common in cards from the 80s. 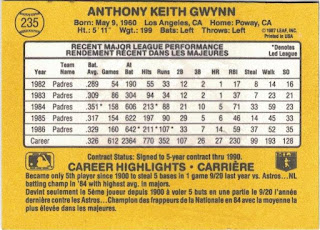 The cardback doesn't have all the same information at the DonRuss cards because of the space needed for the French translation. Some of the career highlights carried over from one year's card to the next. It's always interesting to see what they dropped and what they felt was worth repeating.
Total: 840 cards
I am very busy at the moment so will be taking a short break from blogging. I hope to be back in action before the end of the month!

Posted by Jongudmund at 7:52 AM