After lots of Upper Deck cards this week, what better way to sign off than some of the cards produced when Tony signed off his career?
Card Number 832: Upper Deck Tony Gwynn Celebration of 20 Seasons, 2001; #unnumbered
This one-sided 'thank you' note to the fans acts as a 'header card' for the five card set. Trading Card Database lists these cards as an insert series in Upper Deck's 2001 set, but Baseballcardpedia does not. These cards feel like they were given out as freebies somewhere, based on what this card looks like. 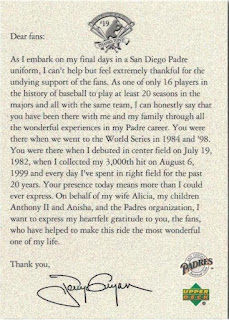 The back of the card is totally blank. I have made the rare decision not to show the cardback because there is literally nothing to show.
Card Number 833: Upper Deck Tony Gwynn Celebration of 20 Seasons, 2001; #1
This card has the same design template at the Upper Deck 2001 set. Tony's base card from that set was the 267th card that I blogged about. 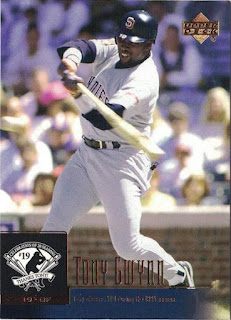 Considering this was a 'tribute' series, the massive stats box on the back feels a bit unnecessary, particularly when it was replicated across all the cards in the set (which it was!) 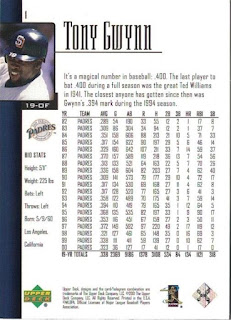 The factoid kicks off the series with the best known statistic about Tony Gwynn - his .394 batting average in 1994.
Card Number 834: Upper Deck Tony Gwynn Celebration of 20 Seasons, 2001; #2 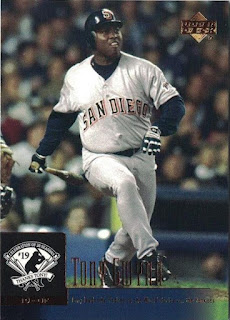 While I would never want to underplay Tony's achievements, it feels a bit odd to read the claim on the cardback that Tony "flourished" in the post-season. Tony only played in the post-season three times, which amounted to a National League Championship defeat and two World Series defeats. 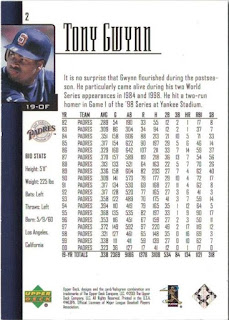 The Padres lost both their World Series without taking the series to game 7. In 1998 they lost 0-4 to an absolutely dominant Yankees team.
Tony's personal post-season records weren't particularly spectacular by his exceptional standards - with the exceptionof the 1998 World Series when he posted .500. He Posted .368 in the national League Championship season in 1984. but only .263 in the World Series - well below his career average.
There was then a 12 year wait for Tony's next post-season appearances, in 1996. The Padres crashed out in the divisional series and Tony posted a .308 batting average. The three post-season series in 1998 saw him build up to that .500 World Series average. In the four games of the divisional series his batting average was a measly .200, and in the Championship series he posted .231.
In total, in 27 games in the post-season, Tony posted an overall batting average of .306, which is well below his career average. It's not really what I would describe as "flourishing". (Although, he still has more World Series appearances as a Padre than anyone else who has ever played for them!)
Card Number 835: Upper Deck Tony Gwynn Celebration of 20 Seasons, 2001; #5
I'm missing number 3 and 4 in this little set! 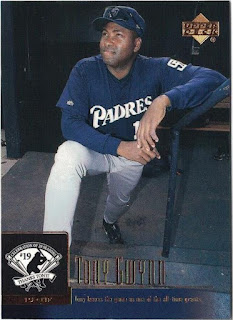 This is easily the best photo on the cards I've got from this set. Tony always seemed to take really good "candids".
I'm not sure on the timing of this card set release because this refers to Tony's retirement in the past tense. 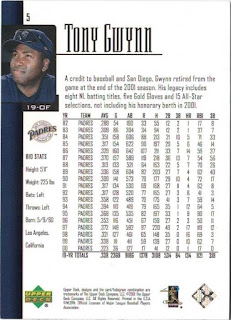 As I remarked about the first card, having the massive stats boxes on all these cards seems daft.
Total: 835 cards
Posted by Jongudmund at 9:37 AM