I've already blogged about four fifths of this shiny little insert set. The fifth and final shiny card is about Tony's induction in the Hall of Fame. 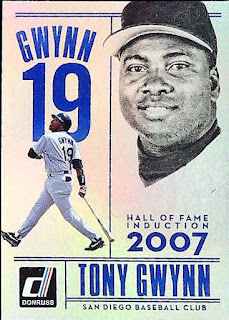 This is the first of these cards that I have scanned using the overhead scanner, which properly captures it's sheer shininess! 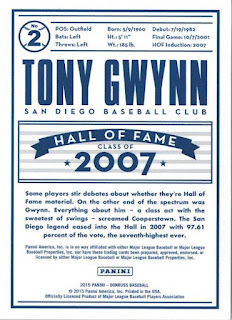 If you've ever watched the video of Tony getting the call to say he was in the Hall of Fame, you can see how much it meant to him, and how nervous he was. According to He Left His Heart in San Diego, Tony thought he might not have done enough in his career to get elected. He is quite obviously overcome by emotion when he actually takes the call.
Card Number 838: DonRuss Optic, 2017; #164
'Optic' is the Panini-era DonRuss version of Chrome. Although this comes as a standalone set, it's basically the same cards as the regular DonRuss set with a shiny coating. 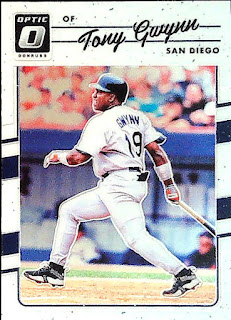 There is also an Optic logo on the front and a different card number on the back. They chose an interesting vignette from Tony's career for the factoid. 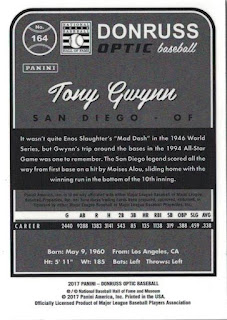 Tony had a good season in 1994. In addition to his post-war record batting average, he also nabbed the winning run in the All-Star Game. It was the first time the National League won the game after six defeats on a row. You can watch Tony's game-winning slide on YouTube - it starts at 4 minutes, 52 seconds on this video!
Panini get a bit of stick for their unlicensed baseball cards issued under various 'zombie brands', but their cards are a decent level of quality and their attention to detail in terms of factoids is very good as well. It's nice to read about something a bit different on a cardback!

Posted by Jongudmund at 7:58 AM