Getting towards the end of Upper Deck week, here are four cards from the end of the 20th century, the last year starting with 19 - 1999. 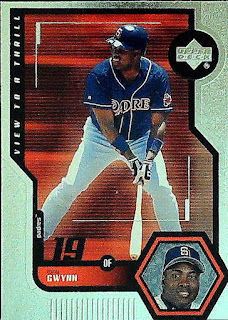 It's a shiny card! I gave it a couple of passes on the scanner. 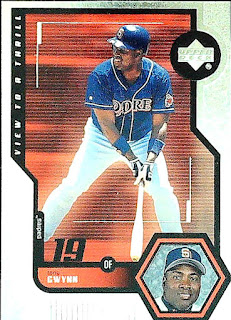 That second one is a bit over-exposed. It's tricky to get this right.
Design notes - hexagons are unusual. I've always liked them ever since watching Doctor Who in 1984 when the interior of the TARDIS was made of white hexagons. Red always looks good on baseball cards too. The red foil on the front isn't as bright as the red on the back, somehow. 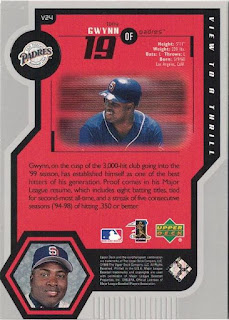 This insert series is reminiscent of the last James Bond film to feature Sir Roger Moore in the role, A View to a Kill. That was also released in 1984 and featured a theme song by Duran Duran. None of that has anything to do with this card, of course. But it's funny how certain cards trigger all kinds of tangential thoughts.
Card Number 829: Upper Deck Challengers for 70, 1999; #73
Remember the power hitting contest between home run sluggers seeking to break all kinds of records for home runs, which later was revealed to be fueled by steroids? Upper Deck got caught up in the hype and released an entire 90-card set about the 'race for 70 home runs'. Depsite never, ever, being a big hitter of home runs, Tony got a card in the set comemmorating his home run in the World Series the previous year. 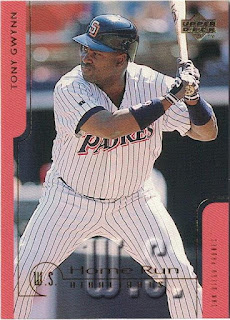 I'm a fan of cards that refer to Tony's World Series appearances, even if they are in weird cash-in sets like this one. Upper Deck were skimping on the photos in this set, with the same picture appearing on the front and the back. 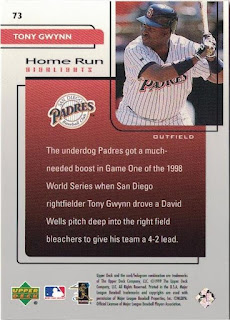 I've mentioned before how David Wells was on the mound for San Diego the night I went to my first ever Padres game. I didn't know then that he was the pitcher that Tony hit his home run off in the World Series in 1998. I might not have ever seen Tony play, but I saw David Wells, so that gives me a personal connection to this factoid.
Card Number 830: Upper Deck MVP, 1999; #S4
Shiny insert! 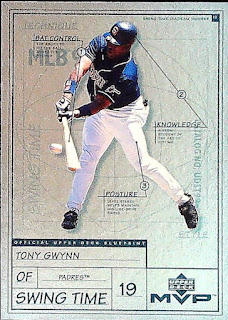 "Swing Time" gives me an earworm of that song 'Springtime' from Mel Brooks's The Producers. Which is unfortunate. I love pseudo-sciencey diagrams on baseball cards. This looks like a blueprint. They add to the technical manual look on the cardback. 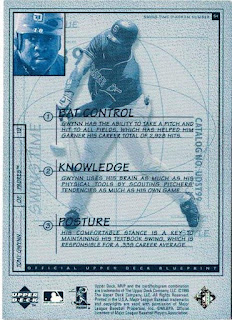 The write up for point 2 uses the phrase "as much as" twice in one sentence. That repetition is below Upper Deck's usual standards for cardback factoids.
Card Number 831: Upper Deck Ultimate Victory, 1999; #93
I've previously blogged three of Tony's cards from the Victory set in 1999. This is the 'Ultimate Victory' foil version of Tony's Victory base card... which is the one card I don't already have! There were 470 cards in the Victory set, but only 180 were included in the Ultimate Victory parallel set. 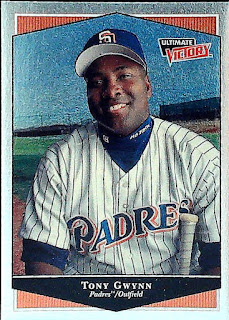 It's a nice card with a posed portrait photo. The back is absolutely rammed with information including a write up of the Jack Murphy Stadium and a breathless summary of Tony's career below a truncated stats box. They have not wasted any space at all! 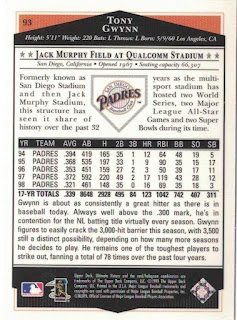 Posted by Jongudmund at 7:35 AM