I've featured an SP card on the blog before along with the revelation that 'SP' didn't actually stand for anything in particular. It was a publishing name for Upper Deck that covered other sports besides baseball. Over the years it spawned offshoot ranges as well. 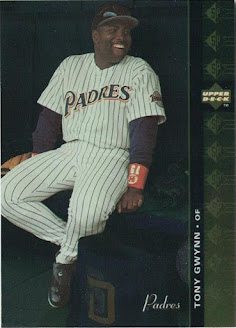 This is a foilboard base card. It didn't scan well. However, it indicates the quality level that Upper Deck were aiming for with this 200-card set. 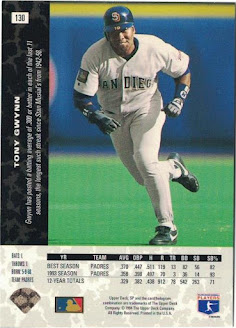 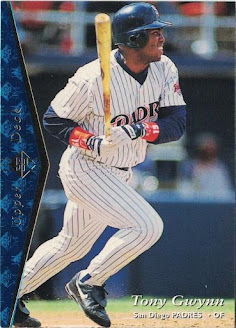 Upper Deck dropped the foilboard effect for base cards in 1995, opting instead for a large foil arrowhead pointing, in this case, at the player's hip. This isn't as charming a photo as the previous year's bench shot.
Fistbump photo on the back! 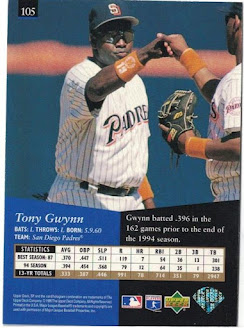 Slightly confusing factoid there. Because the 1994 season ended early due to the player's strike, what the statto has done is take the end of the 1993 season and add that onto the 1994 season. Tony was hot at the end of 1993 so his batting average in those games combined with the games in the foreshortened season he hit .394 gives him an even higher average.
Does that shed any light on the great 'What if?' question that overshadows the .394 achievement? What if Tony had batted the whole season? Would he have broken .400? It looks from this that he had been very consistent from a certain point in the 1993 season, but if that stat is true then he was just peaking on the bell curve and maybe even marginally declining from the absolute height of his batting powers. 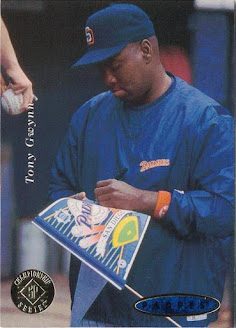 The Championship Series was marked by a gold blob on the front. Seeing a photi like this on a card makes me wonder whether someone has that signed flag somewhere at home. Maybe tucked into a drawer. or possible even in a little frame in a study or fan cave! I wonder if they know their flag has appeared on a baseball card. I hope it's treasured, wherever it is.
The cardback has gone in a different design direction to the regular SP range. 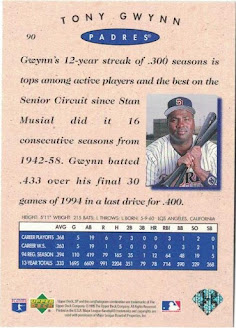 Tony is holding two bats in the photo on the back. It's as if the photographer caught him while he was clearing up after batting practice. The double line spacing reminds me of typing essays for uni. The colloquial use of "tops" instead of "top" is a bit jarring.
This is the second year in a row that Tony's record is compared to Stan Musial. On this card we get another possible answer to the 'What if?' question - in the 30 games before the season stopped, Tony was batting at .433. If he had kept up that intensity then he would have cleared .400 if the season had reached September. So, now the question is, could he have kept up that intensity?
Card Number 319: Upper Deck SP Championship, 1995; #88
Every team had one player who was also selected for a Major League Profile card in this set as well. 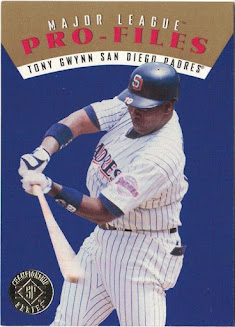 No idea what the hyphen is about.
The back is related to the Padres performances in the post-season. It was the SP Championship series after all. At this point in their history, the Padres post-season results for their entire history fitted comfortably on the back of a baseball card. 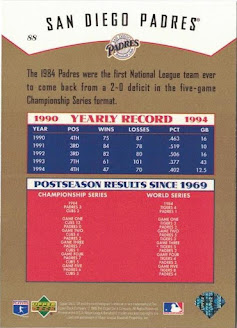 Something I learned today - the Padres were the first National League team to lose the first two games of a divisional championship game and win the series. Looking at the season results from 1993 and 1994 shows how Tony was mired in an underperforming team, even while he was winning batting titles and setting the modern record for batting average.
More SP cards tomorrow!
Total: 319/394

Posted by Jongudmund at 9:45 AM