Back to Base in Upper Deck week

You might be thinking, surely there aren't any Upper Deck base cards Jon hasn't blogged yet? Well, you'd be surprised... 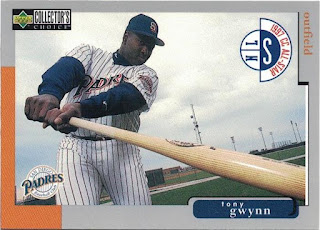 This card is from the last year of  'Collector's Choice'. It became UD Choice in 1999 before being lost forever. As a swansong, that is a fantastic card photo.
On the back we have Tony reaching up to sign autographs. He was well-known for signing autographs, often staying behind long after his team-mates had disappeared into the changing rooms. Any regular readers of this blog will know the 'Did you know?' factoid. I comment on it a lot! (It's still remarkable.) 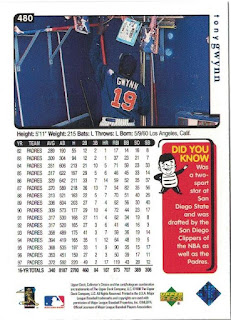 Card Number 826: Upper Deck Encore, 1999; #77
Encore was a parallel set that Upper Deck released, with shiny versions of their base cards from that year. (This could have been a Tuesday Twin card.) As is sometimes the case with these random sets, I've already blogged the two much rarer insert cards from this set. It's nice to add the base card! 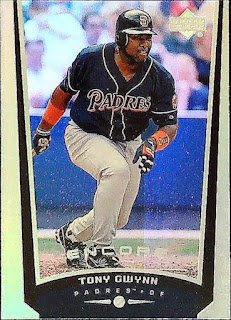 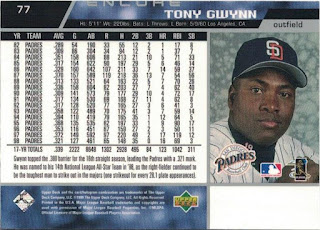 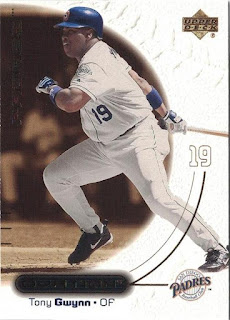 This completes my run of Tony's base cards in the Ovation sets, as I've already blogged the cards from 1999 and 2000. The central motif of these cards was the baseball 'stitching', which was embossed. The stitiching isn't in red on this card, but the embossing marks are quite clear on the back. 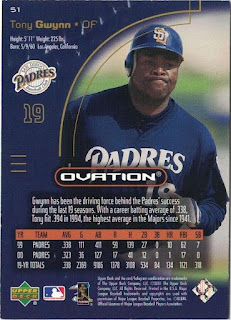 Tony looks disappointed in the photo. Maybe it's because he knew this would be his last year in the Ovation set. The stats box has his figures from the previous two years. It's as if the years before Ovation sets don't count.
Total: 827 cards