My wife laughs about how much I like shiny things. You know that giant crab in the Disney film Moana who lives at the bottom of the sea and hoards shiny things? That's me. I like shiny cards too. Right up to the point where I want to scan them and put them on my blog. And then I hate them.

Today's post is probably the first in a series I'm going to call "scanning nightmares". I'm sorry in advance. 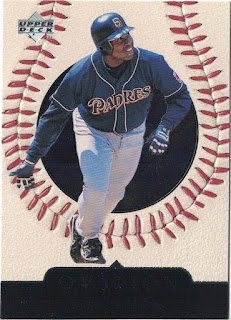 It's only the bottom portion of this card that is foil and has scanned as a big black block. Here's an awkwardly angled photo showing what it actually looks like. 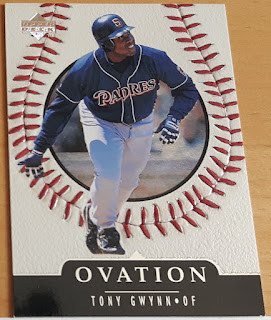 I really like the baseball stitching design on this card, which is embossed. You can see the embossing on the back, where it really stands out. 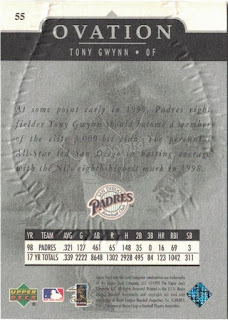 On the cardback, Upper Deck predicted Tony would reach the 3000-hit mark sometime "early in 1999". In fact, it took him until August to record his 3000th hit. 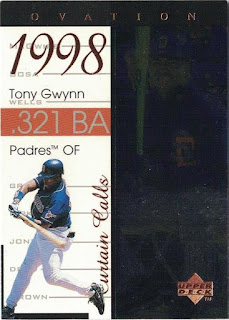 The foil on this insert card scans so badly it makes Tony appear like a ghost on a photo negative on one of those silly ghost hunter shows on late night cable channels.

This is what the card looks like when photographed. 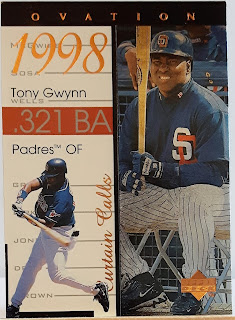 It's still not that great a photo really. Tony is pulling a rather odd expression. 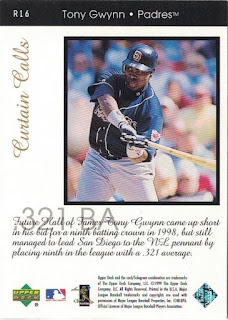 The write up on the back talks about Tony leading the Padres to the National League pennant, rather than mentioning the World Series. It also hails Tony as a "future Hall of Famer". 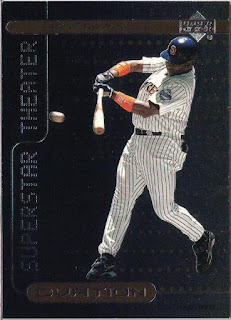 The difference between the scan (above) and the poorly positioned photo (below) is striking. 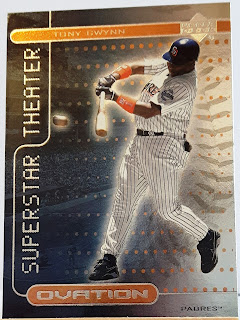 This card was so shiny it kept reflecting me taking the photo as I was trying to photograph it.

There were 20 cards in this insert series featuring the really big names in baseball at the time. Tony is one of seven who have subsequently been inducted in the Hall of Fame. 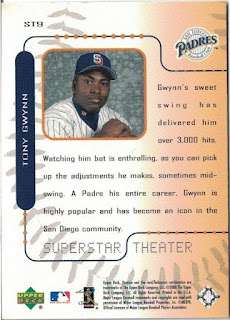 A few posts back I picked up on the description of Tony as an "icon" for my collection of ways Tony is described on cardbacks. Upper Deck use it here as well, so it's not that rare a descriptor.
Thank you for putting up with the awful scanning and amateur photography!
Total: 372/394

Posted by Jongudmund at 8:42 AM